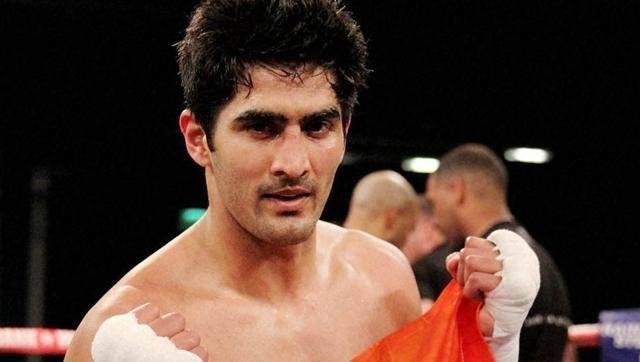 The 30-year-old Indian has been unbeaten since turning pro last year, winning all his six contests so far via knockouts.

Hope, on the other hand, brings with him experience of 30 bouts, of which he has won 23, two of them knockouts.

The Welsh-born Hope, who emigrated to Australia, was also a WBC middleweight champion and has moved a division to super middleweight to take on Vijender.

“He is a superstar in India but to me he is just a boxer. He has been pro for a year, I have been pro for 12 years. I bring a lot of experience. I know the crowd will be behind him but I like being the underdog. The pressure is on him. He has to train harder,” the 34-year-old Hope said at a press conference here.

“I have been world No. 3 in the past. I have heard about his achievements but all that is in amateur. I am an experienced operator in the pro circuit,” he added.

Vijender was his usual understated self when it came to talking before the bout.

“Time will decide what happens on July 16. Just wait and watch,” was his reply to Hope’s statement before the two faced off for a brief while.

Vijender’s two promoters — India-based IOS and UK-based Queensberry Promotions — revealed that the tickets for the bout would go on sale from tomorrow. The first ticket for the bout was presented to former Indian cricketer Virender Sehwag, a longtime friend of Vijender.

“Even in cricket, it’s a lot of fun to beat Australians. So, I hope Vijender beats Kerry,” quipped Sehwag while posing with the ticket.

Queensberry Promotions’ Francis Warren said he expects the 10-round contest to be a tough one for Vijender.

“There will be two four-rounders, two six-rounders, and an eight-rounder before Vijender’s title bout on that day. I think it is a tough fight for Vijender but at stake, apart from the title, is a place inside the top-15 of WBO rankings. That would pave the way for a world title bout for Vijender soon,” Warren said.

“We are expecting a full house. The tickets have been priced from Rs 1000 to Rs 15,000. This is actually a dream realised and perhaps the biggest moment in Indian boxing,” said IOS MD Neerav Tomar.

The bout will be held at the Thyagaraj Stadium, which has a capacity of nearly 6,000, and Vijender has already invited Prime Minister Narendra Modi, cricket legend Sachin Tendulkar and several other dignitaries for what promises to be a mega-event.