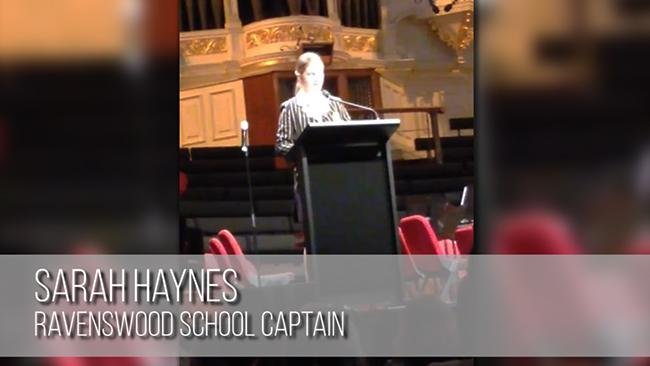 THE school captain of Sydney’s Ravenswood School for Girls has delivered a controversial farewell speech to staff, students and parents where she claimed the school’s elite image was based on propaganda.

A video of her address has since gone viral, amassing thousands of views.

Ms Haynes can be seen and heard on the clip claiming the school was too business-driven at the expense of its students.

“I don’t know how to run a school but it seems to me that today’s schools are being run more and more like businesses where everything becomes financially motivated, where more value is placed on those who provide good publicity or financial benefits.

“I’d love to see Ravo work towards something better where each member of the school feels valued equally.”

It costs up to $28,000 a year for each student to be enrolled at the Uniting Church School.

During the 13-minute speech, Ms Haynes alleged staff members forced her to edit her scripts to reinforce the elite image of the school

“Everything I wrote had to be censored by those higher up than me. I was never trusted to say the right thing,” she said.

She said she was told to take out a line about the school not being perfect in a speech she wrote for an open day earlier this year.

“I sent this to those in charge of me and received a reply: ‘Great speech but change the ending. No parent wants to hear that the school isn’t perfect’,” Ms Haynes said.

Ms Haynes wrote two versions of her address ahead of the speech day: one to show staff and the other she planned to give.

“If the school can’t admit it isn’t perfect how can they expect adolescent girls to realise perfection is unattainable.

“I am far from the model student. I have been kicked out of geography class, I’ve had a detention and I’ve said things that have hurt people.

“The person who doesn’t make mistakes is unlikely to make anything.”

The speech received a standing ovation from students and some parents. Teachers were reportedly “reserved”.

Ms Haynes, who plans to study medicine, said her speech was not a personal vendetta and that she hoped the school would take her message on-board.

“It was definitely taking a risk but I respect the girls in my community too much to be insincere so I took that risk,” she said on Sunday.

“Girls have the right to express their individual opinion,” he said.