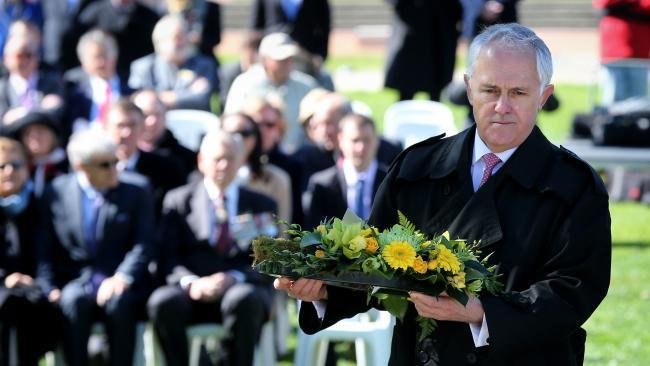 Prime Minister Malcolm Turnbull has announced a $100 million package to tackle the domestic violence epidemic that has gripped the nation, saying he wanted it to be ‘un-Australian to disrespect women’.

‘Violence against women is one of the great shames of Australia. It is a national disgrace,’ Mr Turnbull told reporters in Melbourne on Thursday, noting 63 women had been killed by their partners or a family member this year.

Mr Turnbull said Australia faced a challenge in addressing the consequences of violence and making women safer on the streets, at home and online.

Australia should be known as a nation that respects women.

‘Disrespecting women does not always result in violence against women,’ he said.

‘But all violence against women begins with disrespecting women.’

Leaders had to make it a national objective to make sure Australia was more respecting of women, Mr Turnbull said.

‘We have to make it as though it was un-Australian to disrespect women,’ he said, noting this would be a big cultural shift.

The prime minister cited research showing one in four young men thought it was acceptable to drunkenly slap their girlfriends.

‘Let’s make it our resolution that Australia will be known as a nation, as a people, as a society that respects women,’ he said.

‘What we are talking about is giving the women a choice because it’s quite ludicrous to think we have always placed the onus of safety on to the victim, expected they uproot themselves, move, pull their children out of school, leave the communities and family members that are supporting them, live anonymously and hide,’ she said.

‘It will be that some people have to do that. It will not be the right solution for some women. But a lot of people will want to feel safer at home and ongoing more safely at home.

‘It should not be their responsibility to fund this themselves, to find the resources themselves when they are innocent in this.’

But Ms Batty also indicated there was still much to do to keep all women safe but it was a step in the right direction.

‘This isn’t just one of the solutions but it’s part of a solution,’ she said.

‘I think that it can’t guarantee anyone’s safety but it can go a long way towards women feeling better supported and giving them greater choice.’

‘One of the things we’ll be doing… is we’re going to be working with states and territories who want to partner with the government in relation to the trialling of GPS technology and panic buttons,’ she said.

‘In other words if you’re a high risk offender and you are basically challenging a woman, we’re going to put an ankle bracelet on you so we know where you are at all times.’

The package will also include $36.5 million to provide more training to front-line staff who have direct contact with domestic violence victims.

‘We need to ensure that the appropriate response is given by the police, by the health providers, by the magistrates.’

The minister also said she wanted more women and children to remain in their homes instead of having to escape and live elsewhere.

‘Why should they have to be the ones that have to flee the family home, and go and seek refuge in a shelter?’ Senator Cash said.

‘We’ll be announcing measures in relation to the upgrading of security at homes.

‘We’ll be working with the Salvation Army to ensure women who need risk assessments carried out on their homes are able to have them done and then we will respond appropriately to those risk assessments.’

The package includes $36.5 million over three years to train front-line employees, including police, social and community workers and medical staff.

Duty lawyers will be placed in hospitals to provide women with free legal advice on-site.

Police, social workers and emergency department staff will get an expanded ‘DV-alert’ training program, worth $13.5 million, to help them better support vulnerable women.

It is the latest effort to reduce the number of women who experience domestic violence, which is being investigated by a royal commission in Victoria.

One Australian woman is killed every week by her partner and almost one in three will experience family violence at some point in her life.

Ms Batty, who was named this year’s Australian of the Year, has been pushing for more funding and education to tackle the problem since her 11-year-old son Luke was killed by his father.

Mr Turnbull said on Monday family violence is an ‘enormous’ issue that has been overlooked for far too long.

The latest funding commitment includes $5 million over four years for co-ordinators in hot spots to pull together support packages – like housing and budgeting services – for affected women.

About $1.4 million will be earmarked for community engagement police officers in remote indigenous communities to build relationships with local residents to encourage the reporting of crime.

School students will benefit from a $5 million upgrade to the safer schools website to include resources to help students, teachers and parents communicate about respectful relationships.