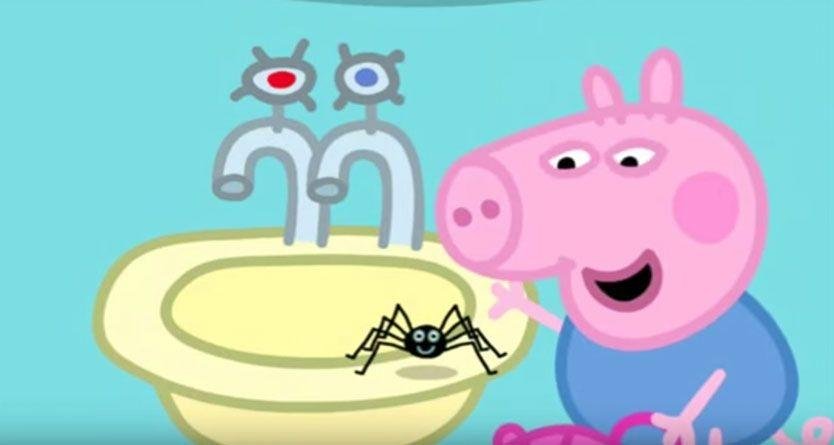 Episode aired on pay TV after earlier being deemed inappropriate for audiences in Australia, home to dangerous spiders

A controversial episode of Peppa Pig has been pulled off the air in Australia for a second time, after complaints it told children to pick up and play with dangerous spiders.

Mister Skinny Legs, a 2004 episode of the popular children’s show, was removed from online publication by the national public broadcaster, the ABC, in 2012 for sending the “inappropriate” message that spiders were friendly and not to be feared.

In the offending episode, Daddy Pig tells a frightened Peppa that spiders are “very very small” and “can’t hurt you” after the eponymous arachnid enters her room. The children are then depicted picking the spider up, tucking it into bed and offering it some tea.

This advice from the British-produced show was deemed to be “inappropriate for Australian audiences” and the ABC banned it from future broadcast. The episode had not been broadcast on TV because of its unsuitability, but was “accidentally published online due to a technical problem”, the ABC said at the time.

Not all Australian spiders are “very, very small” and some can hurt you. Last year footage of a huntsman carrying a mouse up a fridge in the Queensland town of Coppabella became an internet sensation – the huntsman’s leg span can be as large as 16cm. Australia’s dangerous spider species include the venomous redback spider, the funnel-web spider, white-tailed spider and wolf-spider, according to the Australian Museum. It estimates 2,000 people are bitten each year by redback spiders, and 40 by funnel webs. Data released in January revealed 12,600 people were admitted to hospital for spider bites between 2000 and 2013.

On 25 August, the episode was aired again on Nick Jr, a children’s channel affiliated with Nickelodeon and available on the Australian pay TV service Foxtel.

A Sydney mother, named only as Jess, told Fairfax Media she complained to Nick Jr. The channel initially refused to pull the episode, saying Mister Skinny Legs “did not look real”.

“The episode is light-hearted, friendly and very mild in impact; the overarching message of the episode is about respecting all creatures,” it said.

“The context of the way the spider is portrayed in the episode lessens any impact of scariness or danger; the spider does not look real, it has a smiley face and is shown in context of a show with other talking animals.”

But after being contacted by media, Nick Jr said it would remove the episode from programming rotation, despite continuing to maintain that it “does meet our criteria”.

The five-minute episode shows the two children discovering the spider in the bathroom sink and eventually befriending it. “George wants the spider to be his friend,” the program’s narrator says. “George likes the spider and the spider likes George.”

The spider, listed as played by voice actor Hazel Rudd, does not speak but smiles very widely.

It is not the first time Peppa Pig has come under fire in Australia after conservative commentator Piers Akerman accused it of having “a weird feminist line” in 2013.