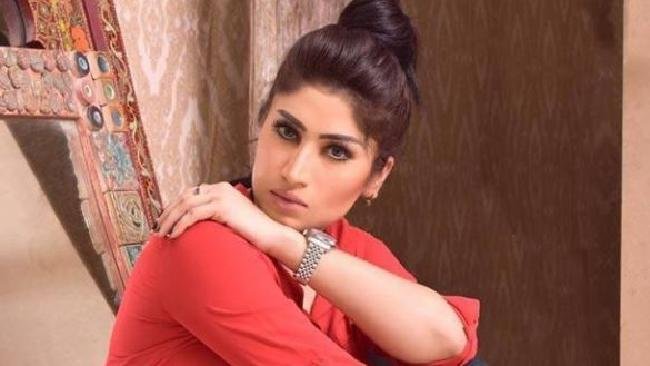 THE brother of slain Pakistani social media star Qandeel Baloch on Sunday confessed to strangling her to death for “family honour” because she posted “shameful” pictures on Facebook.

Baloch — a 26-year-old model who fought to break social taboos and empower women — was found dead on Saturday at her family home in the central city of Multan.

Police arrested her brother, Waseem Azeem, and presented him before the media in Multan, where he confessed to killing her. He said people had taunted him over the photos and that he found the social embarrassment unbearable.

“Yes of course, I strangled her,” Azeem said at a press conference, organised by police, on Sunday.

“She was on the ground floor while our parents were asleep on the roof top. It was around 10.45pm when I gave her a tablet … and then killed her.

“I am not embarrassed at all over what I did. Whatever was the case, it (his sister’s behaviour) was completely intolerable.”

He said that even though Baloch was the main breadwinner for the family, he slipped her sedatives the night before and then strangled her in her sleep.

“I was determined either to kill myself or kill her,” Azeem told The Associated Press as he was being led away.

Baloch had become a social media celebrity in recent months and stirred controversy by posting pictures online taken with a prominent Muslim cleric.

Nearly 1000 women are murdered in Pakistan each year for violating conservative norms on love and marriage. The so-called “honour killings” are often carried out by family members.

Such killings are considered murder. But Islamic law in Pakistan allows a murder victim’s family to pardon the killer, which often allows those convicted of honour killings to escape punishment. Regional police chief Sultan Taimuri said authorities will seek the maximum punishment for Azeem, without providing further details.

Baloch, whose real name was Fauzia Azeem, was buried Sunday. She had shot to fame and notoriety through social media postings that would be considered tame by Western standards but were seen as scandalous by many in deeply conservative Pakistan.

On Friday, the day she was killed, she posted a picture with the message, “No Matter how many times I will be pushed down under, But I m Fighter I will Bounce back..”

The most recent scandal came when Baloch — who has been described as “Pakistan’s Kim Kardashian” — posted selfies with prominent cleric, Mufti Adbul Qavi in a Karachi hotel room.

In one picture, she was wearing the cleric’s trademark fur-lined hat.

She said the two of them enjoyed soft drinks and cigarettes together during the daylight hours in the holy month of Ramadan, when practising Muslims fast from dawn to dusk.

Qavi maintained that he only met with her to discuss the teachings of Islam. But the government suspended Qavi and removed him from the official moon-sighting committee that determines when Ramadan starts and ends in accordance with the Islamic lunar calendar.

In the wake of that scandal, Baloch said she had received death threats and asked for Interior Ministry protection.

Baloch was condemned and reviled by traditional elements for promising to perform a public striptease if the Pakistani cricket team won a major tournament and recently appearing in a music video, gyrating barelegged in high-heels and a see-through top to a rap song.

She built up a large social media fanbase, with 40,000 Twitter followers and more than 700,000 followers on her official Facebook page at the time of her death.

She presented herself as a symbol of female empowerment in a country where domestic violence is commonplace and hundreds of women are murdered by family members each year in so-called honour killings — punishment for violating conservative norms.