‘One India One Election’: PM Modi’s Idea Gets President’s Vote 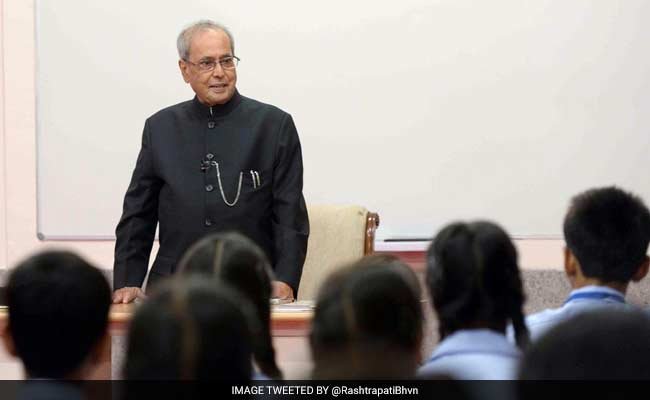 “Call me Pranab Sir or Mukherjee Sir,” the 80-year-old veteran politician declared as he walked into a classroom of 60 students.

“Pranab Sir’s class” was a Teacher’s Day treat for students of the Rajendra Prasad Sarvodaya Vidyalaya, which is within the sprawling presidential estate. He shared his views about a range of subjects, including PM Modi’s idea of holding all elections at the same time.

When a Class 11 student asked the President on the spending on elections and whether it would be good to hold all polls in one go, he replied: “The Election Commission can also put in their idea and efforts on holding the polls together and that will be highly beneficial.”

The student, Ragini, said she “couldn’t believe” that the President had answered her question with humility.

Mr Mukherjee also had a strong message on terrorism. “We certainly face attacks but from cross-border terrorism. The success of our governance and administration lies in ensuring that homegrown terrorism, which is the world’s biggest menace today, is not yet there in India,” he said to the students.

In the lecture that lasted an hour, the President also stressed on secularism, saying: “Secularism is a part of our life and it is still unfolding.”

PM Modi first floated the simultaneous polls proposal during a BJP meeting in March, saying this would cut down on the huge cost of holding elections each year. The Election Commission estimates that Lok Sabha and state polls cost around Rs. 4,500 crore in 2004.

In June, the Election Commission backed the idea, saying that the issues involved in holding simultaneous elections are not insurmountable for it if there is political consensus and will across the board.