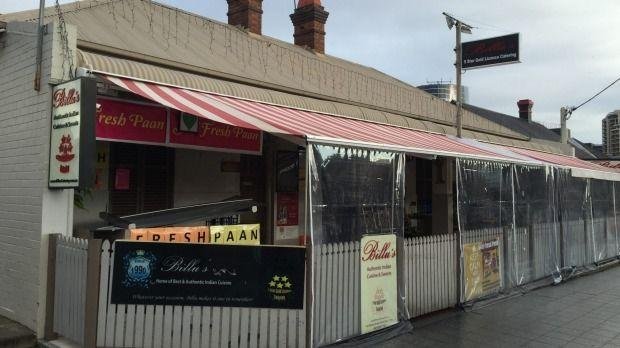 About 9.00pm on Tuesday 25th August a shot was fired into Billu’s Indian Restaurant, at Wigram Street, Harris Park. At the time the restaurant had between 30 – 40 customers inside.  No persons were injured as a result of the incident.   Police attended and set up a crime scene to process the area.
As a result police identified that a single shot was fired from outside the restaurant which penetrated a louvered window shutter then struck a metal shelf before coming to rest on a service counter.

A male person wearing a light blue hoodie was seen to run from the area at this time.  Police are working to identify this person as they may be able to assist with inquiries.

A Police investigation is currently underway with a range of inquiries being made.  Police are currently taking a number of statements in respect of the matter and reviewing CCTV holdings in the area.

Police are appealing for any community members to come forward with any information in respect of the matter.  Particularly any persons or vehicles that were seen to leave the area around this time.  This can be reported to crime stoppers on 1800 333 000.

Investigation is in early stages and police are certainly keeping an open mind in respect of the motive behind this attack.  At this time there is no evidence to suggest that this attack is racially motivated, it is certainly a criminal act that has taken place and will be investigated to the full extent.

Operation Moren has been established to investigate this matter.

Previous shooting at Australian Migration Services 4 August, 2015.
This is being investigated by SF Biamble.  A 19 old male has been charged with a firearm offence and the matter is presently before the court.

Suspicious Fire – Sunny Hair Salon on 4 August, 2015
This is being investigated by SF Selector by the SCC Property Crime Squad.  The fire is being treated as suspicious and there are a range of inquiries continuing in relation to this matter.