Not just SRK, Big B hopes Aaradhya, AbRam make a good pair too 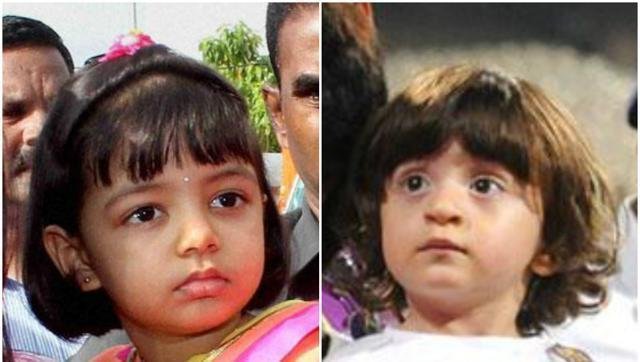 Looks like grandpa can hardly wait to see his baby onscreen. Bollywood actor Amitabh Bachchan wishes that his grand daughter Aaradhya and good friend Shah Rukh Khan’s son AbRam act together when they grow up.

Notably, at a recent press conference, Shah Rukh had named Aaradhya-AbRam as the best couple when he was asked to choose between Ranbir-Deepika, Ranveer-Deepika, Alia-Sidharth and Fawad-Sonam.

Though his Dilwale co-star Kajol disagreed with him saying AbRam is younger than Aaradhya, the Chennai Express actor said “Love has no age.”

When asked what he has to say about it, Bachchan told reporters today, “Un kay mooh may ghee shakkar aur doodh malai… (May his words come true).”

Bachchan was speaking at the press conference of his upcoming thriller-drama Wazir.

The 73-old actor said that his wife Jaya Bachchan has watched the movie twice. “She is my wife, so of course we will talk (about the film)… Not once, she has watched the film twice.”

To this, filmmaker Vidhu Vinod Chopra, who is producing Wazir, added, “When she (Jaya) went to watch it the first time we were nervous, when she went the second time we were drinking champagne. She has watched the film twice in three days.”

Directed by Bejoy Nambiar, Wazir is the story of two unusual friends – a paralysed chess grandmaster, played by Bachchan, and a grief stricken ATS officer, enacted by Farhan Akhtar – brought together by a twist of fate.

Chopra said that Bachchan went through a “lot of pain” to play the role of a man who has no legs.

“He went through a lot of pain for this role. It is very difficult to perform a person who has no legs when you actually have legs, and you’re pretending, acting that you don’t have. You will see what an incredible job he has done.”

Bachchan, who has earlier collaborated with Chopra in Eklavya- The Royal Guard, said when he first started working with him, “two ladies” from Bollywood had given him different opinions.

“When I was going to work with him for the first time, two ladies gave me warnings. The first one said he will take care of you and will be the best producer ever to work with. The second one asked me when am I leaving, I said tomorrow, she said okay then I’ll talk to you day after because you’ll

On being asked who the ladies were, the Piku actor said, “Then it’ll be public… Okay, the first lady was Preity Zinta, the second was my wife.”

Wazir, which also stars Aditi Rao Hydari, is scheduled to release on January 8.