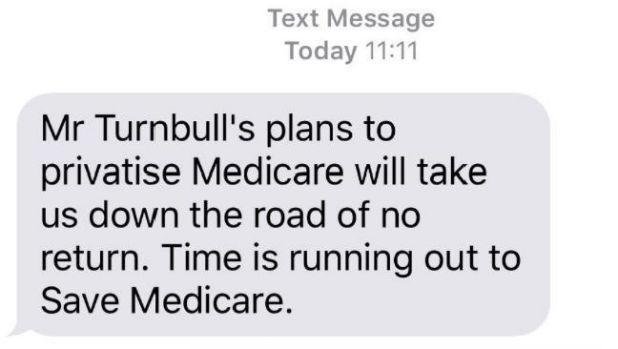 The Australian Federal Police won’t take any action over a Queensland Labor election-day text message to voters claiming Medicare was under threat from the Coalition.

The Liberal Party filed a police complaint over the text message in the wake of the July 2 election result, but an AFP spokesman said on Tuesday no investigation or charges would proceed.

Voters reported receiving the text message urging them not to vote for the Coalition, which appeared to come from a sender under the name “Medicare”.

“Mr Turnbull’s plans to privatise Medicare will take us down the road of no return. Time is running out to Save Medicare,” the message said.

Labor’s Queensland branch confirmed it sent the text messages, but a spokesman said they had not intended to give the impression Medicare was the sender, but rather that it was the subject of the text message.

The so-called “Mediscare” campaign by Labor was considered a key factor in the party’s stronger-than-expected performance at the election. Opposition Leader Bill Shorten campaigned heavily on the issue in the final weeks of the eight-week campaign.

Prime Minister Malcolm Turnbull slammed the messages as false and deceptive and Attorney-General George Brandis said they appeared to be “prima facie breaches of the law”.

Speaking after the inconclusive election-night result, Mr Turnbull said the texts were “an extraordinary act of dishonesty” and said police would investigate the source of the messages.

“What they did, they targeted older Australians with millions of robocalls and text messages,” he said.

“I mean think about this, this is a party that sent out a text message containing the lie, which said it was from Medicare.”

In a statement on Tuesday, an AFP spokesman said: “This matter was evaluated by the AFP [and] no Commonwealth offences were identified.

“This matter is now considered finalised and no further comment will be made.”

The Commonwealth Electoral Act makes it a crime to “print, publish or distribute, or cause, permit or authorise to be printed, published or distributed, any matter or thing that is likely to mislead or deceive an elector in relation to the casting of a vote”.

Special Minister of State Scott Ryan said he would ask Parliament’s committee on electoral matters to consider the issue as a priority as part of its review of the election.

Amid criticism of the Coalition’s election performance, Mr Turnbull said the messages had been sent to people who were most likely to be misled in marginal seats.

“If that wasn’t a crime, it should be one,” Mr Turnbull said last month.

“I think we say that if a television advertisement or a newspaper advertisement by law has to say ‘authorised by XYZ on behalf of the Liberal Party of Australia or the Australian Labor Party’ then so should a text message, so should a robocall.”