Nidhi Chaphekar who became the face of terror attacks 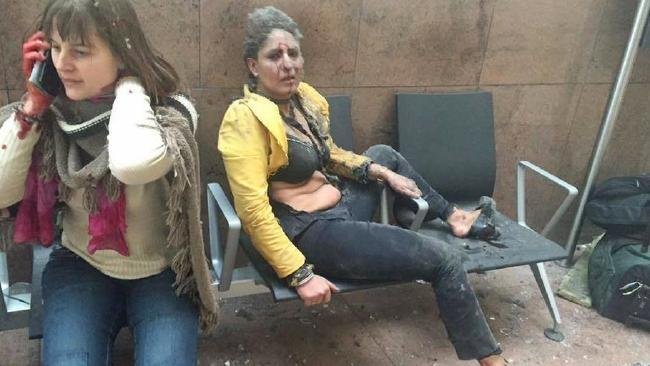 HER yellow uniform torn to shreds, a flight attendant slumps shocked and weeping amid the carnage at Brussels airport.

Smoke-blackened Nidhi Chaphekar was pictured dazed and covered in dust just seconds after the deadly attack.

The hostess with Indian-based Jet Airways had been about to join the rest of her crew for a flight to Newark, US, when the suicide bombers detonated their blasts.

It was quickly shared by millions around the world as the full extent of the horror in Belgium emerged.

Married mum-of-two Nidhi, from the Mumbai suburb of Andheri, is understood to have worked for the airline for 15 years.

A source told The Sun: “Her family have been told by Jet Airways that she is doing well in hospital.

“They are in shock and have not been able to speak to her yet. But the Indian Embassy has confirmed she is now out of danger. We are so grateful that she has survived this appalling tragedy.”

Jet Airways, which is based in Mumbai, said: “She was waiting to board a flight from Brussels to Newark at 10.15am local time. She is a cabin crew member.

“We don’t have full information on the extent of her injuries. We know her location — she is in hospital and receiving medical care.”

A male colleague of Nidhi, Amit Motwani, suffered slight eye injuries but was said to have checked in as “safe” on Facebook.

An official statement from the airline said: “Two staff have sustained injuries in the explosion at Brussels airport. Both of them are receiving medical care at hospitals.

“We are working very closely with the Indian Embassy and are in touch with the ambassador to plan the next steps for evacuation of our guests from Brussels.

“Jet Airways has cancelled flights operating to/from and via Brussels.”