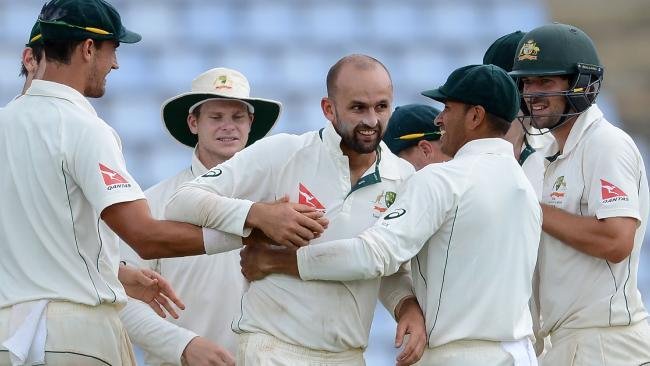 NATHAN Lyon’s historic milestone of 200 Test wickets was overshadowed by a double blow for Australia.

O’Keefe is in doubt for the remainder of the first Test and the rest of the three-Test series. The second Test starts in Galle on August 4.

Sri Lanka will resume on the fourth day’s play on 6-282 with an overall lead of 196 after a day in which Australia let slip its advantage.

Lyon is the first Australian and the sixth player in the world to take 200 Test wickets as a specialist off-spinner.

Kusal Mendis played almost a lone hand and is unbeaten on 169, the second-highest score by a Sri Lankan against Australia.

The 21-year-old is playing in his seventh Test and had only one first-class century to his name before this week.

Australia’s left-arm orthodox slow bowler O’Keefe had taken 2-32 and 1-42 in the first two-and-a-half days of play before leaving the with a right-hamstring complaint.
In just his third Test, the NSW tweaker was set to play a major role alongside Lyon in the three-Test series on spin-friendly pitches.
O’Keefe bowled two deliveries in the first over of a new spell in the 49th over of the innings before breaking down, leaving Adam Voges to finish the over.
Sri Lanka resumed on 1-6 and reached 4-116 at lunch.
Mendis, who came to the crease at 2-6, reached his maiden hundred with a six off the bowling of Lyon.
The No.4 batsman’s heroic innings included 20 fours and one six off 243 deliveries.

Sri Lanka had made a shocking start, losing Dimuth Karunaratne for a duck from the third ball of the day’s play.

Karunaratne called for a video review which was unsuccessful.

Opener Kaushal Silva adopted the same tactic when he was trapped in front by O’Keefe. Replays showed the ball crashing into leg stump and Sri Lanka was 3-45 in another howler for Sri Lanka’s tactics.

However Australia also had trouble with its reviews, with O’Keefe blowing both on LBW appeals.

Skipper Angelo Mathews and Mendis added 41 for the fourth wicket to erase the home team’s first-innings deficit of 86.

Australia hit back as Mathews fell without addition to the total, caught at bat-pad off Lyon’s bowling.

Mitchell Marsh removed Chandimal LBW for 42, but the home side was back in the game.

Lyon raised both arms in triumph after becoming the 16th Australian to join the 200 club.

The 55-Test veteran from NSW celebrated joyously after Dhananjaya de Silva was caught at mid-off for 36.

Bad light stopped play with the new ball due and a minimum of 20 overs remaining in the day’s play.