NASA’s spacecraft Juno gets to Jupiter 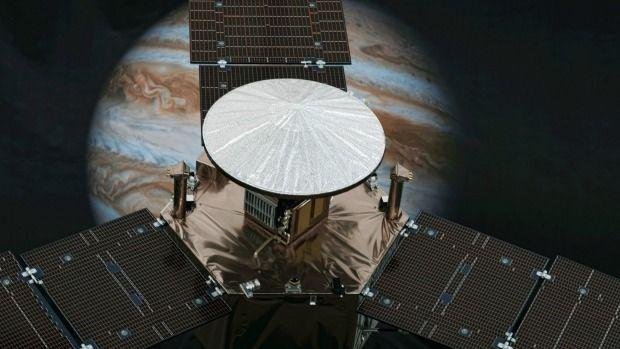 The Juno space probe has begun the perilous final stage of its five-year, 2.25 billion kilometre journey to Jupiter from Earth as scientists attempt to guide the spacecraft into orbit.

The probe, named after the Roman goddess, is undergoing a high-risk manoeuvre to bring it closer to the giant planet than any spacecraft has come before and into one of the solar system’s most hostile environments.

The automated procedure began in the early hours of Tuesday before a “giant” burn of its rocket slowed its approach speed from 250,000km/h.

There was applause as mission control teams from Nasa’s Jet Propulsion Laboratory (JPL) at the California Institute of Technology and Lockheed Martin in Denver received data that suggested the rocket had ignited as planned.

“Happy Fourth of July, everyone,” Scott Bolton, the principal investigator of the mission, said during a news conference on Monday.

Space enthusiasts and scientists have eagerly been awaiting this point in Juno’s five-year journey, the first solar-powered spacecraft to travel this far from the sun. If the explorer successfully latches onto Jupiter’s gravity, it will be only the second time that a probe has gone into orbit around the giant planet.

The crucial moment will be the end of the engine burn, at 1.53pm AEDT.

Bolton said even then he would not feel at ease, not until Juno’s expansive nine-metre-long solar arrays are pointed back at the sun, crucial for a spacecraft that is relying on sunlight for power.

“The whole game is, get back to the sun before you run out of battery,” Bolton said.

With the exception of the sun, Jupiter is bigger than everything in the solar system put together. But little is known about the interior beneath its colourful cloud stripes.

Juno will orbit it 37 times over the next 20 months, with the hopes that it will collect data and images that offer clues to the origins of our solar system and the formation of the planets and moons.

The mysteries of Jupiter

Several spacecraft have flown past Jupiter, beginning with Pioneer 10 in 1973. NASA’s Galileo spacecraft, entering orbit in 1995, dropped a 340 kilogram probe into Jupiter’s atmosphere, sending back data that showed Jupiter had strong, turbulent winds and offering details about the composition of its atmosphere.

During its eight years at Jupiter, Galileo confirmed ideas of how Jupiter’s diaphanous rings formed out of dust particles blasted off Jupiter’s small inner moons. It measured the sizzling 2800-degree temperatures of volcanoes on Io, one of the planet’s four large moons, and it found evidence of under-ice oceans on the other three moons of Europa, Callisto and Ganymede.

Unlike Galileo, Juno will be in an orbit passing over Jupiter’s poles, providing a first close look at those regions. With repeated close passes over the cloud tops, the spacecraft will measure microwave emissions, the gravity field and the magnetic field, offering glimpses into what is deep inside Jupiter.

The search for water

It might seem odd to care about the water on Jupiter, but it is one of the main issues that Juno scientists are focusing on.

On Mars, NASA’s strategy seeks to find out whether there was water that would have ever made Mars cozy enough for life.

Jupiter, with its crushing gravity and ultra-intense radiation, is clearly not a hospitable place for life, but that’s not why scientists are interested about water there.

Rather, the question is, “Where’s the oxygen?” Jupiter has greater concentrations than the sun of most of the heavier elements like nitrogen and carbon, except for oxygen, which is scarce. Thus, scientists expect that oxygen atoms have each been tied up with two hydrogens to form water molecules.

The measurements collected by Juno of microwave emissions emanating out of Jupiter will tell both the temperature and how much water there is, because water molecules absorb microwaves.

If Juno finds a lot of water, that suggests Jupiter formed further from the sun in the colder, icier regions and later migrated to its current orbit.

At the heart of the matter

Does Jupiter have a rocky core at its centre?

Measuring Jupiter’s gravity field will tell the distribution of mass within. If there is a rocky core, planetary scientists will have to explain how rocky bodies formed that early in the solar system. If there is not, then Jupiter formed out of a collapse of a gas cloud, much as the sun did.

The mysteries of metallic hydrogen

Jupiter is almost entirely hydrogen and helium, the two simplest and most abundant elements in the universe.

Cool these two gases, and they change to a liquid. Inside Jupiter, hydrogen is believed to undergo another transformation, to a metal. Scientists have not been able to recreate metallic hydrogen on Earth.

In laboratory experiments, hydrogen, squeezed to tens of millions of pounds per square inch between two diamonds, has remained stubbornly nonmetallic.

The pressure inside Jupiter is hundreds of millions of pounds per square inch.

By studying Jupiter’s magnetic fields, probably generated by currents of metallic hydrogen, scientists will receive hints about the properties of this elusive substance.

What could possibly go wrong?

“I’m confident it’s going to work,” Bolton said, “but I’ll be happy when it’s over and we’re in orbit.”

Some of the ways that this could turn into a bad day:

Juno blows up: In August 1993, NASA’s instrument-packed Mars Observer spacecraft vanished. An inquiry concluded that a fuel leak caused the spacecraft to spin quickly and fall out of communication. While Juno’s set-up is different, there is always a chance of an explosion with rocket fuel.

The engine doesn’t fire at all: The Japanese probe Akatsuki was all set to arrive at Venus in December 2010, but its engine didn’t fire, and Akatsuki sailed right past Venus. Last year, Akatsuki crossed paths with Venus again, and this time, using smaller thrusters, it was able to enter orbit.

It crashes into something: Jupiter does not possess the majestic rings of Saturn, but it does have a thin ring of debris orbiting it. Juno will pass through a region that appears clear, but that does not mean it actually is. Even a dust particle could cause significant damage, as Juno will be moving at a speed of 212,000km/h relative to Jupiter.

It flies too close to Jupiter and is ripped to pieces: In one of NASA’s most embarrassing failures, the Mars Climate Orbiter spacecraft was lost in 1999 because of a mix-up between English and metric units. Climate Orbiter went far deeper into Mars’ atmosphere than planned. On its first orbit, Juno is to pass within 4600 kilometres of Jupiter’s cloud tops, so a miscalculation could be catastrophic.

The computer crashes: On July 4 last year, the mission controllers of the New Horizons spacecraft that was about to fly by Pluto experienced some nervous moments when the spacecraft stopped talking to them. The computer on New Horizons crashed while trying to interpret some new commands and compressing some images it had taken, the electronic equivalent of walking while chewing gum.

The controllers put New Horizons back in working order within a few days, and the fly-by occurred without a hitch. For Juno, the scientific instruments have been turned off for its arrival at Jupiter.

“We turn off everything that is not necessary for making the event work,” said Levin, the project scientist. “This is very important to get right, so you don’t do anything extra.”

The intense barrage of radiation at Jupiter could knock out Juno’s computer, even though it is shielded in a titanium vault. Usually, when there is a glitch, a spacecraft goes into “safe mode” to await new instructions from Earth, but in this case, that would be too late to save Juno. The spacecraft has been programmed to restart the engine automatically to allow it to enter orbit.

“If that doesn’t go just right, we fly past Jupiter, and of course, that’s not desirable,” Bolton said.

The final hours of the approach

Juno has been executing an automated sequence of actions since Thursday.

A timeline of what Juno will be doing (all Eastern time):

11.13am Start of transmission of single frequency “tones” that will provide updates on the spacecraft’s condition.

11.16am Juno begins turning away from the sun to position the engine in the right direction to slow the spacecraft for its arrival at Jupiter.

12.41pm With the main antenna pointing away from the sun, Juno switches to a smaller antenna for sending the tones.

12.45pm Juno adjusts itself to eliminate any wobbling.

1.38pm The spacecraft has slowed down enough to be captured into orbit around Jupiter.

1.53pm The main engine shuts off, leaving Juno in the desired orbit.

1.55pm The spacecraft starts slowing its spin rate back down to two revolutions per minute.

2.07pm Tuesday. Juno changes direction to point its antenna back at Earth.

2.11pm Juno ends the transmission of status tones and switches to its medium-gain antenna.

2.16pm Juno begins transmitting detailed telemetry, although it may take 20 minutes or longer to lock into the signal.

The first two highly elliptical orbits will be 53 days in duration, lasting until mid-October.

Then Juno will fire its engine again on October 19 to move to a 14-day orbit when the science measurements begin in earnest. Three nine-metre solar panels provide a mere 500 watts to power the Juno and its instruments.

On November 3, people will be able to start voting on where Juno should point its camera.

On the 37th orbit, on February 20, 2018, Juno is to make a suicidal dive into Jupiter, ending the mission, the same way that the Galileo spacecraft was disposed in 2003.

That is to ensure there is no possibility that Juno would crash into Europa and contaminate it with microbial hitchhikers from Earth.

Europa is regarded as one of the most likely places in the solar system to look for life.

Why only 20 months in orbit?

It took five years to get to Jupiter, and the mission costs $1.1 billion, yet Juno will have a far shorter stay than the eight years Galileo spent exploring Jupiter in the moons.

The close approaches to Jupiter means Juno will pass through intense bombardment of the radiation belts. As the mission progresses, Juno’s orbits will receive more direct hits of radiation. In the best outcome, the mission might be extended for a few months. But over time, the spacecraft’s electronics will fail.