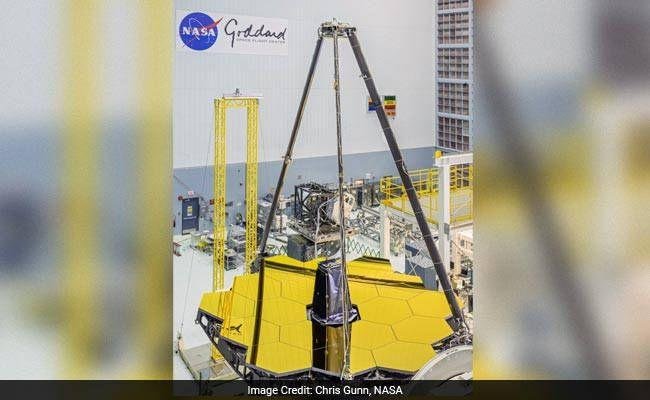 The universe’s biggest space telescope is as tall as a three-story building and as wide as a tennis court. Its main mirror, a collapsible honeycomb of 18 gleaming, gold-covered hexagons, is large enough to collect light from the very first, most distant stars and sensitive enough to capture the heat signature of a bumblebee on the moon.

Someday – someday soon, NASA officials hope – it will soar a million miles above Earth, giving astronomers an unprecedented glimpse at the edge of space and the beginning of time.

On Wednesday, they were content to admire their new telescope as it gleamed beneath the fluorescent lights of the sterile “cleanroom” at the Goddard Space Flight Center in Greenbelt, Maryland.

“It sure is shiny,” one woman said.

That’s the least of the adjectives you could use to describe the James Webb Space Telescope, a 14,300-pound, $8.8 billion piece of hardware more than two decades in the making. It has been hailed as revolutionary and questioned as a boondoggle, and at times there were doubts about whether it would even come to be. In 2011, with work on the telescope behind schedule and over budget, Congress nearly voted to scrap the program.

A compromise kept things going, with a new launch date of October 2018. Earlier this year, engineers finished assembling the gigantic mirror, and this week they removed its protective coverings for the first time. No one at NASA had seen the assembled telescope in all its gilded splendor before – not even the JWST program director, Eric Smith.

“It’s amazingly beautiful,” Smith said. “I’ve seen this as PowerPoints and CAD drawings for about 20 years now. But to actually see those dreams made manifest is really pretty moving.”

The centerpiece of the project is the telescope itself: the primary mirror, at more than 250 square feet, and two smaller mirrors, designed to collect and focus some of the faintest light in the universe. It is far larger than any other telescope that NASA has launched – the primary mirror on the Hubble Space Telescope, which JWST will be replacing, has less than one-fifth of the collecting area – and it will be orbiting at a much colder and more distant point in space. That meant that NASA had to come up with entirely new ways to build it.

Each hexagon in the mirror is made of lightweight beryllium, which can withstand the minus-388-degree temperatures the telescope will encounter far off in space. The hexagons are coated with a thin layer of gold because the element is the best reflector of infrared light, the wavelength that marks the most distant objects in the universe (the universe’s expansion causes waves of light to stretch out as they travel through space and time, a phenomenon called “red shifting”). The JWST will be able to detect light from stars that formed 13.5 billion years ago – a mere 200 million years after the Big Bang, the cosmic equivalent of the blink of an eye.

And it’s portable, too: The mirror was designed to fold up like an immense origami figure, so it can fit onto the rocket that will carry it into orbit.

In another corner of the cleanroom at Goddard, engineers in white protective suits and blue gloves cluster around the JWST’s instrument box, which will be affixed to the back of the telescope after each component has been tested. There will be four scientific instruments on board when JWST is launched – two provided by NASA and one each from the Canadian and European space agencies. Each is designed to sense light at a specific range of wavelengths, allowing the telescope to, say, peer through clouds of dust and gas to watch new stars in the making, or gaze back through time and space to capture the faint light of the most distant galaxies.

The instruments are essential to JWST’s four scientific missions: finding the earliest stars and galaxies, understanding how galaxies evolved, observing the formation of new stars and solar systems, and scanning Earth’s neighboring planets for their chemical properties and signs of life.

But first they must all fit into their box, an effort that Lynn Chandler, the JWST program’s spokeswoman (and unofficial hype woman), describes as “the ultimate game of Operation.”

“You’ve got to get it all in there, and you can’t touch anything,” she said.

Leaving even the smallest eyelash or faintest smudge on the equipment could have catastrophic consequences for the telescope – like getting dirt on your contact lens, if your contact lens were as big as an RV and a million miles away from any cleaning solution. A group standing on the viewing platform joked about what would happen if scientists identified a fantastic new galaxy, then realized it was actually someone’s fingerprint.

There’s no chance of that happening, Chandler said. The cleanroom is orders of magnitude cleaner than an operating room, and the engineers and technicians in it are covered from their booties to their surgical caps. Only their eyes peer out over their face masks.

They will continue assembling and testing the equipment at Goddard – a process that includes shaking it inside a launch simulator and blasting it with noise so loud that it chips paint from the walls – then send the telescope and instruments on to the Johnson Space Center in Houston. In late 2017, they will head to contractor Northrop Grumman’s facility in California to meet up with their spacecraft and kite-shaped sun shield (which protects the telescope from interference from the sun). Then it’s on to the launch site in French Guiana, where the whole ensemble is due to take off in October 2018.

NASA estimates that the telescope will begin sending back data roughly six months after that. This time three years from now, scientists could be gazing at some of the oldest things they have ever seen.

“The telescope is really humanity’s deep-space exploration device,” Smith said. “… Our curiosity drives us to ask what is out there, and this is the ultimate expression of that.”