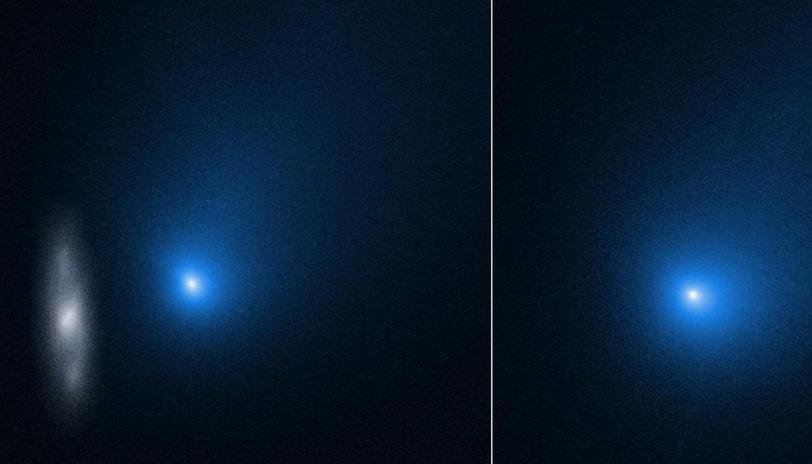 US space agency NASA has released the picture of the ‘visitor’ interstellar comet that flew past our Sun and headed towards a new galaxy. The comet, 2I/Borisov, is the first identified comet to arrive in our solar system from another star. Scientists haven’t yet been able to determine from where or when the comet started heading toward our Sun.

The path of the comet was first observed by Gennady Borisov, an astronomer from Crimea in Eastern Europe and it showed that the comet followed a path that was curved, hurtling in the direction of the sun at a really high speed, giving evidence that it indeed was an interstellar object. The Sun’s gravity is slightly deflecting its trajectory, but can’t capture it because of the shape of its orbit and high velocity of about 100,000 miles per hour. Telescopes around the world have been tracking the comet.

NASA’s Hubble Space Telescope provided the sharpest views as the comet Borisov skirts by our Sun. It has been tracking the celestial body since October. Hubble revealed that the heart of the comet, a loose agglomeration of ices and dust particles, is likely no more than about 3,200 feet across, about the length of nine football fields.

The comet appears in front of a distant background spiral galaxy (2MASX J10500165-0152029). The galaxy’s bright central core is smeared in the image because Hubble was tracking the comet. Comet Borisov was approximately 203 million miles from Earth in this exposure. Its tail of ejected dust streaks off to the upper right. The comet has been artificially coloured blue to discriminate fine detail in the halo of dust, or coma, surrounding the central nucleus. It also helps to visually separate the comet from the background galaxy.

Hubble revisited the comet shortly after its closest approach to the Sun where it received maximum heating after spending most of its life in frigid interstellar space. The comet also reached a breathtaking maximum speed of about 1,00,000 miles per hour. Comet Borisov is 185 million miles from Earth in this photo, near the inner edge of the asteroid belt but below it. The nucleus, an agglomeration of ices and dust, is still too small to be resolved. The bright central portion is a coma made up of dust leaving the surface. The comet will make its closest approach to Earth in late December at a distance of 180 million miles.