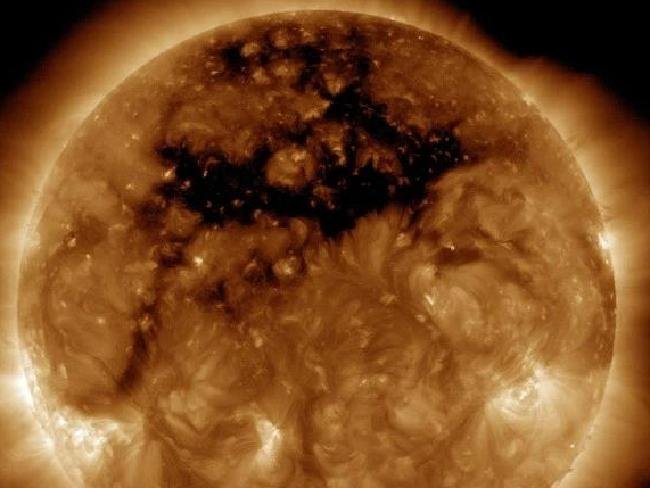 NASA has spotted an enormous black mass growing on the surface of the sun.

The gulf in our parent star was first spotted by NASA’s Solar Dynamics Observatory spacecraft and while it looks troubling, the space agency has assured the dark region is nothing to fear.

NASA said the dark patch is called a coronal hole, which is a large version of a phenomenon frequently occurring on the surface of the sun.

“Coronal holes are low-density regions of the sun’s atmosphere, known as the corona,” NASA wrote.

“Because they contain little solar material, they have lower temperatures and thus appear much darker than their surroundings.”

The space agency said the mass can take up a quarter of the sun’s surface and is created by a gap in the magnetic field.
“Coronal holes are the source of a high-speed wind of solar particles that streams off the sun,” NASA said.
While emitting a stream of highly charged particles won’t have any negative consequences on Earth, it can cause problems for communications satellites packed full of sensitive electronics.
There is always the possibility NASA is wrong, however, and the event is the start of a conspiracy theory predicting the end of the world on July 29.

If this theory holds merit, we can expect to see cities collapsing as the Earth’s magnetic poles reverse.