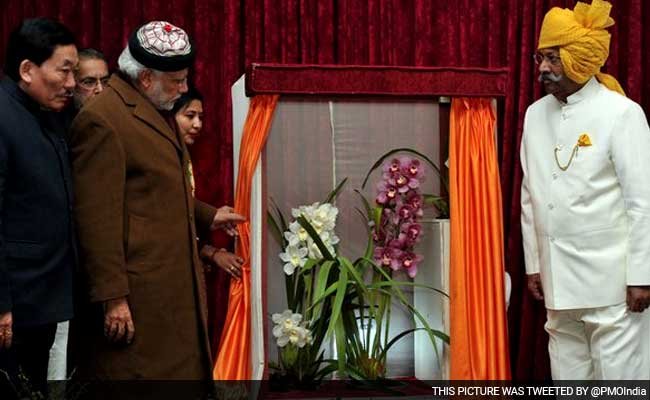 NEW DELHI:  Prime Minister Narendra Modi had an orchid named after him today. The Cymbidium NaMo was named by Sikkim Chief Minister Pawan Chamling while he was accompanying the Prime Minister at a flower show in Gangtok.

PM Modi had unveiled three orchid varieties which were developed in Sikkim.

He named two of the orchids- one after national icon Sardar Vallabhbhai Patel and the other after Jan Sangh leader Pandit Deendayal Upadhyay — Cymbidium Sardar and Lycaste Deendayal.

Chief Minister Chamling named the third one after the Prime Minister, who thanked the Sikkim government for this honour.

Addressing a conference of agriculture ministers at the venue, PM Modi said, “Don’t let me become delicate like a flower. I have lived among the thorns, I will continue to live among the thorns… But there cannot be any bigger privilege if my life can be useful in wiping the tears of a sad person with the delicacy of a flower…”

The Prime Minister, who is on a two-day visit to the state, had arrived at the Libing Army Helipad earlier today and was received with a guard of honour by the Black Cat division of the Indian army and different battalions of Sikkim Police.

“I have come here with agriculture ministers of all the states. We are here to discuss how to transform India’s agriculture,” PM Modi said.

Sikkim, he said, was a state where the environment is protected and which, at the same time, was scaling new heights of development.

Appreciating Sikkim’s progress n organic farming, he said, “What we are seeing today is the result of tremendous hard work and belief in an idea.”