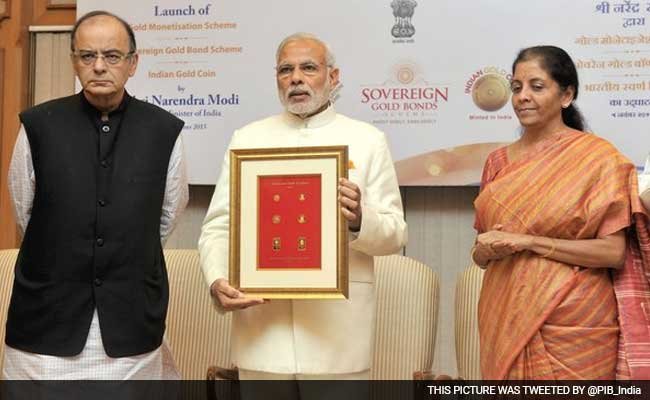 The three schemes that Modi launched are Gold Monetisation Scheme (GMS), Gold Sovereign Bond Scheme and the Gold Coin and Bullion Scheme. Modi also unveiled the first ever national gold coin minted in India with the national emblem of Ashok Chakra engraved on it.

The Gold Monetisation Scheme is aimed at tapping part of an estimated 20,000 tonnes of idle gold worth Rs. 5,40,000 crore in family lockers and temples into the banking system.

The Gold Sovereign Bond will be issued by the Reserve Bank of India (RBI) on behalf of the government with an interest rate of 2.75%. The bonds will be sold through banks and designated post offices.

Describing the schemes as “sone pe suhaga” (icing on the cake), Modi said gold has often been a source of women’s empowerment in the Indian society, and these schemes will underscore that sense of empowerment.

“Women in India usually don’t own house or a car in their name, but gold is a matter of their strength. India has 20,000 tonnes of idle gold. It is an important aspect of women empowerment,” Modi said while speaking at the launch, “people should take advantage of the golden opportunity to help India march to a golden period.”

“India has surpassed China as world’s largest gold consuming nation with 562 tonnes of buying so far this year,” he added.

India’s obsession with gold is rivalled only by China, with the metal used widely in wedding gifts, religious donations and as an investment.

Previous attempts at mobilising this gold have been unsuccessful, but PM Modi is hoping higher interest rates paid will help it to succeed this time.

Show me the money

Huge gold imports have pushed India’s current account deficit to a record $190 billion in 2013, prompting the government to hike its duty on imports to a record 10%. Imports fell to an estimated $34 billion in 2014-15, but Modi is looking to cut that further.

However, Anantha Padmanabhan – southern region head of the All India Gems and Jewellery Trade Federation – said an amnesty was needed for people to deposit up to 500 grams of gold without any questions. The government has yet to make its position clear on this issue.

Investors will have to disclose their permanent account number, registered with the income tax department, if the value of gold is worth more than Rs. 50,000 ($763.53). Some people fear it is a way for the government to keep a tab on the source.

Another concern is the likely loss of 20-30% of the weight of jewellery as it is melted at certified centres at the cost of the depositor.

“My wife may get a shock when she sees the actual value of jewellery and I may soon get a tax notice,” said a state-run bank official, who declined to be named.