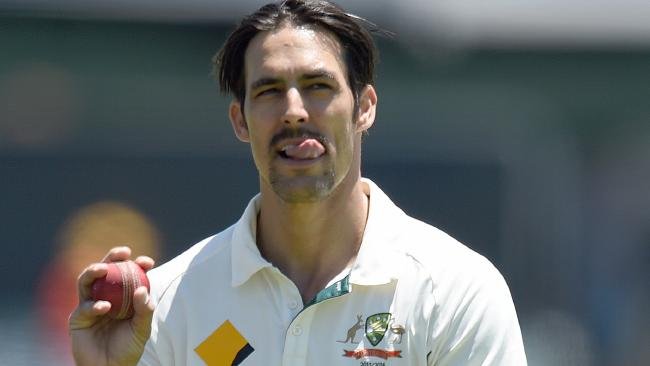 MITCHELL Johnson has confirmed today is his last as an international cricketer.

One of Australia’s greatest ever fast bowlers has decided to walk away after contemplating retirement intensely for the past couple of months.

An emotional Johnson broke down in tears after day four, and last night told teammates of his decision in the dressing rooms, where players remained for more than two hours.

The strain of making the call on his future has clearly taken its toll on the 34-year-old over recent days, but he retires after 73 Tests as the country’s fourth highest Test wicket-taker with 311 scalps.

Johnson’s series-sweeping 37 wickets at an average of 13.97 in the Ashes series two summers ago will live large in Australian cricketing folklore forever.

“I feel now is the best time to say goodbye,” Johnson said.

“I have been lucky enough to have had a wonderful career and enjoyed every moment of playing for my country. It’s been an incredible ride.

“But the ride has to come to an end at some point and to do so here at the WACA is very special.

“I’ve given the decision a lot of thought. Beyond this match, I’m just not sure that I can continue competing consistently at the level required to wear the Baggy Green.”

Johnson will also cease representing Australia in one-day and Twenty20 cricket, however, there is the possibility the left-armer will continue to make himself available for the IPL.

The boy from Townsville’s career has had its highs and lows.

It seemed Johnson’s Test career may have been over after he was left out of the 2013 Ashes tour of England.

But his stunning resurgence just six months later in the home series against England defined Johnson as one of the country’s finest ever bowlers.

Johnson was feared for his electrifying pace and ability to terrify batsmen — with the likes of Jonathan Trott, Graeme Swann and Matt Prior all virtually forced into retirement after the carnage that was the 2013-14 Ashes.

He sits behind only Dennis Lillee (355), Glenn McGrath (563) and Shane Warne (708) on the list of Australia’s greatest wicket-takers.

One of cricket’s genuine superstars, Johnson was part of the 2007 World Cup-winning squad before starring in Australia’s champion XI earlier this year at the MCG.

Johnson said he owed everything to his family and teammates.

“My career has certainly had its up and downs but I can honestly say I have given it my all and am proud of everything I have achieved,” he said.

“To win an Ashes series and a cricket World Cup is something I will treasure forever.

“My family have been by my side throughout and I could not have achieved all I have without their support. They have made a lot of sacrifices, especially my beautiful wife Jess who has provided me with unconditional support, and I am incredibly grateful for that.

“They say the greatest thing about playing sport is the friends you make along the way and I have been fortunate enough to play and work with some incredible people and have cemented lifelong friendships.

“I would certainly like to thank the people of Australia, and all those around the world, who have supported me. The encouragement I have received has been extremely humbling and playing in front of them is certainly something I will miss.”

Johnson debuted way back in 2007 at the Gabba and peaked back in 2013-14 when his speed and aggression saw him claim 59 wickets in eight Tests against England and South Africa at an average of 15.23.

“Dennis Lillee was certainly right many years ago when he identified a young Mitchell Johnson as a future great of Australian cricket,” said Cricket Australia chairman David Peever.

“In many ways the sight of Mitchell as a moustached tearaway conjured memories of Lillee at his peak, not just in appearance, but for some of the most devastating fast bowling ever produced by an Australian.

“There have been countless highlights, but no one will ever forget his incredible performance in the 2013-14 Ashes when he took that series by storm, only to repeat those efforts soon after in the history-making win over South Africa in South Africa.

“I am sure there are many batsmen around the world breathing a sigh of relief right now, knowing that they no longer have to face him.

“He leaves the game as one of our all-time great bowlers and as an excellent example to young Australians about what they can achieve through hard work and dedication to their chosen craft.”