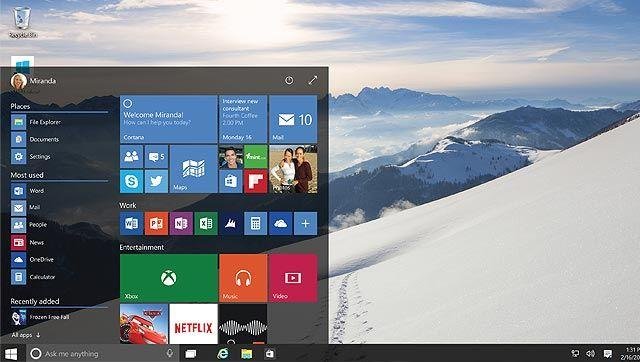 Microsoft is aiming to build lasting relationships with Windows 10, the operating system to be launched on Wednesday and seen as critical to reviving the fortunes of the once-dominant tech giant.

For the first time, Microsoft is making a major new version of Windows available free as an upgrade to anyone using either of the prior two generations of the system.

The goal is to swiftly have Windows 10 powering a billion devices, creating a gigantic audience to induce developers to crank out must-have apps for the platform.

Microsoft hopes to break the cycle in which consumers shun Windows for mobile because it lacks the large catalog of applications found on rival platforms, thus discouraging app makers from creating Windows versions.

Hit apps could ramp up popularity of Windows-driven hardware made by Microsoft and its partners, and increase opportunities for the company to make money from online activities such as search, shopping and software as services in the Internet cloud.

“This is all in the direction of building a relationship, being connected with you,” Forrester Research analyst Frank Gillett said of Windows 10.

“They make it free so developers make good stuff. And then create an ongoing relationship instead of just a transaction, which is how Microsoft has operated in the past.”

Microsoft has built its empire on packaged software sold to computer users and makers.

Windows remains the leading operating system for personal computers but has failed to gain traction on mobile devices such as smartphones and tablets, dominated by Google’s Android and Apple’s iOS.

Special events are planned in 13 cities around the world in tribute to the more than five million “insiders” who took part in a Windows 10 test period.

The operating system will come as a free upgrade to people who already use Windows 7 or Windows 8.1 and will be available in 190 countries.

Microsoft is not making Windows 10 free to computer makers, which is where it has historically gotten the bulk of its revenue from the operating system.

“The piece that is given away free is a piece that nobody was buying anyway,” Gartner analyst Stephen Kleynhans told AFP.

“You can think of the free upgrade almost as being a teaser — a free sample of the new operating system.”

Microsoft has also made Windows available free to makers of small-screen gadgets such as smartphones or tablets to gain traction in the mobile market.

Windows 10 will come pre-installed on Microsoft-compatible computers and tablets from July 29 and will be available for purchase later in the year.

The move marks a major launch for Microsoft, after the lukewarm response to Windows 8, which was rolled out in 2013.

To mark the shift, Microsoft skipped directly from Windows 8 to Windows 10.

“This the first time they have gone two generations back and said you are getting it free. It is pretty aggressive,” said independent technology analyst Rob Enderle of Enderle Group.

“They are doing it because Windows 8 bounced. They have to move the Windows 7 and 8 users and do it en masse.”

Microsoft has high hopes for Windows 10, which it wants to see installed in a billion devices around the world by 2018. Some 1.5 billion machines run on earlier versions of the operating system.

Windows 10 boasts a common base on which developers will be able to build apps that work on smartphones, tablets, PCs and desktops, and even Xbox. It will also feature virtual assistant Cortana.

The new operating system is critical for Microsoft as the PC market has been shrinking while smartphone sales have boomed.

And even in PCs, the longtime Microsoft bastion is under siege by devices such as Android or Apple tablets and Google Chromebooks.

“The hope is to pull the application guys over, particularly on the phone side where Microsoft has struggled, and give users a common experience on phone, tablet, and PC,” Enderle said.

Early this month, Microsoft said it will cut 7,800 jobs and wrote down the value of the struggling mobile phone division it acquired last year from Nokia by some $7.6 billion.

The announcement represented the second major round of layoffs in a year for Microsoft, which cut some 18,000 jobs a year ago as part of its effort to integrate the Finnish-based phone group.

Microsoft said that it would “restructure the company’s phone hardware business to better focus and align resources.”

Satya Nadella, who became chief executive in 2014, is seeking to reinvigorate a company that had been the world’s largest but which has lost the leadership of the tech sector in recent years.

Gillett predicted that Microsoft will shift from doing major Windows releases to routinely honing the software and adding features.

“The dramatic idea is that this is Windows as an ongoing service experience that evolves with you,” the Forrester analyst said.

Microsoft’s efforts to adapt to modern Internet trends have included making popular productivity programs available as cloud services and as applications on mobile devices powered by Apple or Android software.

“They really are focused on delivering a range of cloud services, and in a lot of cases it won’t just be on Microsoft’s platforms,” said Gartner analyst Kleynhans.”It’s a good strategy.”