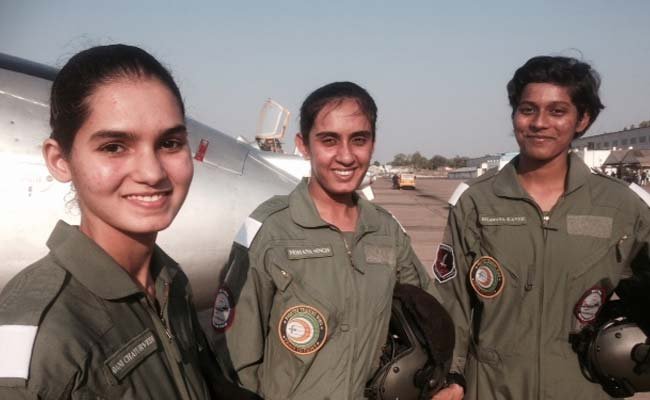 Hyderabad:  Indian Air Force air chief marshal Arup Raha announced on Monday that the country would get its first women fighter pilots in June this year.

“It is not the right time for it now,” said Bhawana Kanth from Bihar, one of the three women who will become India’s first women fighter pilots.

“It has always been the right time for women to become fighter pilots. I am only grateful that it at least happened now,” she added.

For Bhawana Kanth, it was a childhood dream to be a fighter pilot, something only boys were expected to aspire to be. At least that was the stereotype.

“But my parents never made me feel I needed to think any different just because I am a girl,” says Ms Kanth.

Mohana Singh comes from an air force family. Her father and grandfather both served in the Indian Air Force.

“They were in transport not fighter pilots,” she says and adds joining the Air Force was a family tradition and dream.

“After B.Tech like the army of youngsters who look for jobs in IT, I too joined Cognizant but was simultaneously preparing to join the services too,” Ms Singh said.

She credits her instructor for inspiring her to become a fighter pilot. “We were three girls out of eight girls in our batch who got short listed for this once the opportunity arose. We grabbed it with both hands,” she said.

Avani Chaturvedi from Rewa in Madhya Pradesh says it’s no different being a woman fighter pilot. The challenges are exactly the same for both sexes. “We have to compete like anyone else and we are not looking to be treated differently either,” she explains.

“They will be treated as fighter pilots rather than women pilots,” air chief marshal Arup Raha said. And the women can’t wait to be fighters soaring the skies, living their dream and becoming the dream for several others hoping to fly one day too.