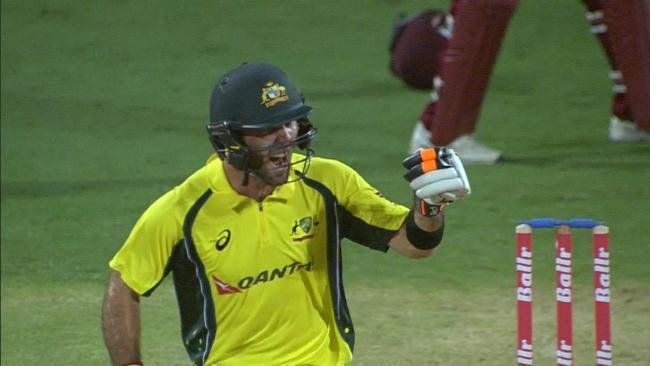 Steve Smith’s side needed a victory in Barbados to advance to the series final, also at Kensington Oval on Monday (AEST).

Marsh stepped up, top scoring with 79 as Australia hauled in their target of 283 with eight balls remaining and six wickets in hand.

Maxwell, dropped by selectors earlier in the tournament, smacked a couple of astonishing boundaries in a thrilling finish.

He defused mystery spinner Sunil Narine with a switch-hit six in the 46th over, then creatively helped Australia take 17 runs off the next over.

The all-rounder’s quick-fire 46 came off 26 deliveries and put the result beyond doubt.

However it was Marsh and Steve Smith (78) who did the bulk of the work. Darren Bravo found Smith short of his ground in the 42nd over but missed a crucial run-out chance when Marsh was on 44.

Marsh made him pay, striking six boundaries in one of the most polished innings of his short career.

In a drama-filled contest, Marsh was scratchy at the start of his innings but finished in formidable form.

Smith’s dismissal ended a 122-run partnership and left the visitors wanting a further 62 runs from 50 deliveries.

The required run-rate blew out to almost nine an over but Maxwell was in his element.

Samuels’ 125 was the 35-year-old’s first century in any format against Australia and lifted West Indies to 8-282.

Smith would have banked on chasing a much smaller target after winning the toss and snaring two catches as West Indies slipped to 3-31.

But man-of-the-match Samuels and Denesh Ramdin (91) steadied in style, breaking records as they feasted on some wayward bowling and listless fielding in a 192-run stand.

Sloppy fielding was again an issue for Australia.

Matthew Wade dropped a one-handed catch when Samuels was on 65 and West Indies were 3-132 in the 29th over.

However Smith somewhat coutner-balanced this by taking a brilliant one-handed grab at slip to dismiss Darren Bravo.