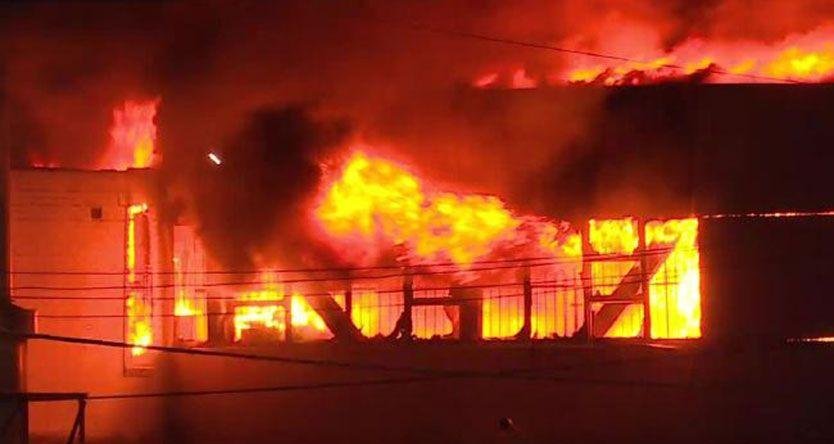 SIXTEEN fire trucks and three cherry pickers are on the scene at a massive fire at a tyre factory — called Brooks Tyres, Brake and Steering — in Parramatta.

The blaze broke out at the two-level factory, which has about 1500 tyres inside, on Church St just before 9pm and by 11pm the firefighters had managed to contain the blaze to the one building.

Fire and Rescue Acting Superintendent Duncan White said that the building had collapsed and the flames had spread to a neighbouring property.

“This is a major fire … to have that sort of a response to a fire … that is a lot of appliances,” he said.

He said the smoke contained high amounts of carbon because the tyres were fuel.

“We’ll have hazmat crews on scene, they’ll also be monitoring the water that runs off from the fire,” he said.

There were no reports of injuries and the cause of the blaze was still unknown last night.

Witness Tina Shiz said the air was filled with thick black smoke which “stank of rubber”.

“There were lots of fire trucks on the scene and the cops closed off a big area surrounding the building. Emergency services seemed to be handling the scene well,” she said.

Firefighters had to hack through a roller door to get access to the factory building.

David George said he was in a nearby pub with friends and saw the fire engulf the factory.

“It was a very small fire coming out of the air vent in the corner of the building,” he said.

“(Then) they were huge, the flames were right up until the ceiling caved in.

“It caused a big explosion … From the ceiling, they were 15-20 metres, maybe a little bit more.”

Meanwhile, near Newcastle, firies were kept busy at another factory fire.

A massive fire at a factory in Tomago also broke out before midnight.

There were concerns about gas cylinders inside the building, which was described as “well alight”.