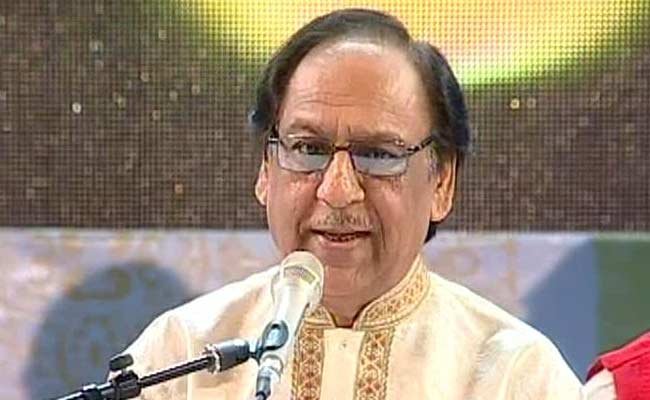 Entry to the concert was by invitation only, the audience left star struck. The one blot was Tripura Governor Tathagata Roy’s hostile tweet.

“We had almost given up hope a few months ago to celebrate the merits of this great singer with the kind of atmosphere that was created in Mumbai,” said Mumbai-based filmmaker Mahesh Bhatt at the beginning of the show. “Thank you Mamatadi, for making us proud as Indians.”

In October, the maestro’s Mumbai concert was cancelled days before it was to be held following threats by Shiv Sena, which rules Maharashtra in alliance with the BJP.

Today, Ghulam Ali thanked Ms Banerjee for her the invitation.

“I am very happy today. I have come to Kolkata for the last 35 years. This time it feels like there has been a gap of 50 years. Mamatadi has behaved like (the goddess) Saraswati,” he said.

Giasuddin, 40, who came from Delhi to attend the show, said, “The message is that he can visit anywhere in India. 90 per cent India is secular.”

“Kolkata more liberal thanks to the new government… There is no spirit of intolerance here,” said city resident Mahilaka Begum.

A discordant note, though, was struck earlier in the day, as Tripura governor Tathagata Roy tweeted: Tathagata
Paki singer GhulamAli in Kolkata. No ppl on earth hv sufferd at Paki hands as mch as Bengali Hindus. Bengalis forget,said Haraprasad Shastri

Most thought the tweet inappropriate. “He should not make such statements as a governor,” said city resident Rajiv Sahay.

Md Amin Ansari, vice-chairman of the ruling Trinamool Congress’ minorities cell, who was also one of the organisers of the show, was angry.

“Mamata has given the country a message of national integration and a slap on the face of divisive forces,” he said. “Who is Tathagata Roy?  If Governors speak like this, they are not fit to be Governors.”