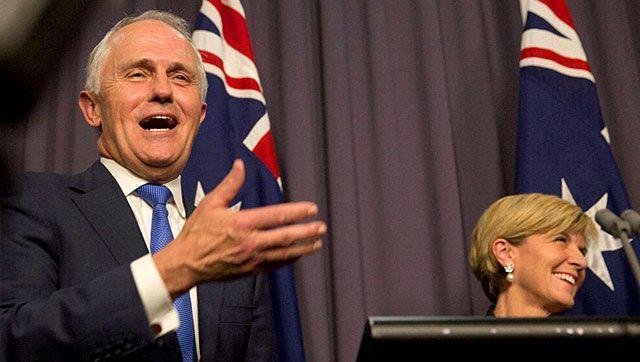 MALCOLM Turnbull will be Australia’s 29th prime minister, after beating Tony Abbott for the Liberal leadership.

Mr Turnbull beamed as he left the partyroom flanked by his deputy, Foreign Minister Julie Bishop. Mr Abbott looked stunned as he walked past the cameras.

There was a second vote for deputy leader, which Foreign Minister Julie Bishop won over Kevin Andrews, 70-30.

There were two extra votes for the deputy leader contest because there was one informal ballot for the first vote and Victorian senator Michael Ronaldson made it to the partyroom in time for the second vote.

Both Mr Abbott and Mr Turnbull are expected to address the media tonight.

Mr Turnbull won’t be prime minister officially until he is sworn in by Governor-General Peter Cosgrove.

HOW IT WENT DOWN

After remaining coy about his leadership ambitions for the best part of the year, Mr Turnbull announced that he would challenge Mr Abbott in Canberra this afternoon.

He said Mr Abbott was not “capable” of the “economic leadership” needed to run the country.

Perhaps the most convincing point Mr Turnbull made was that the Coalition had lost the past 30 Newspolls in a row.

WHAT TURNBULL STANDS FOR

In many ways, Mr Turnbull is considered Mr Abbott’s opposite within the broad church of the Liberal Party.

While Mr Abbott was considered one of the most socially conservative Australian prime ministers in decades, Mr Turnbull has been criticised within his own party for not being conservative enough.

Unlike Mr Abbott, Mr Turnbull supports gay marriage, wants Australia to replace the British monarch with an Australian president as head of state, and backs a policy of making polluters pay for their carbon gas emissions.

Despite his more progressive tendencies, Mr Turnbull has indicated today that he would maintain Liberal policy to hold a plebiscite on same-sex marriage and he has vowed to stick with the party’s existing targets on climate change cuts.

Mr Turnbull was opposition leader for two years before he lost a partyroom ballot by a single vote to Abbott in 2009. His downfall was his belief that Australia should make polluters pay for their greenhouse gas emissions.

Opinion polls show that Mr Turnbull is more popular than Mr Abbott, but many of those who prefer him vote for the centre-left Labor Party.

Mr Turnbull is the type of classical liberal who has become rare in the oddly named party, which has been overrun by conservatives in recent decades. It was called the Liberal Party when it was established in the early 1940s because it believed in individual freedoms, while their Labor opponents favoured state control and heavy regulation.

Mr Turnbull is a self-made multi-millionaire regarded by some as arrogant and has been nicknamed “The Silvertail” due to his wealth and privilege.