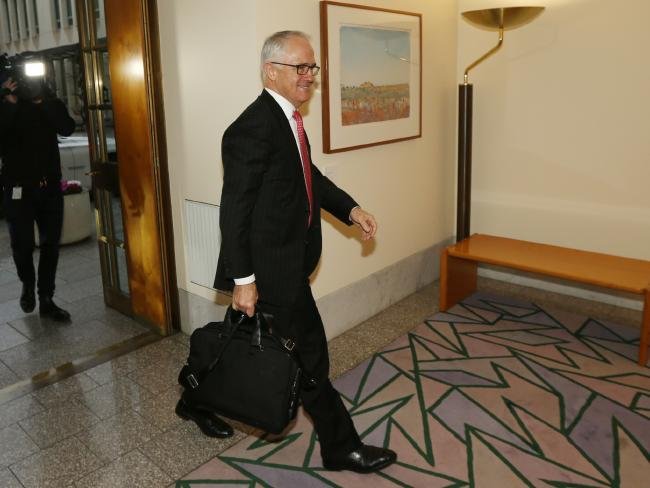 HE’S hardly stepped back into the building but returned Prime Minister Malcolm Turnbull is already getting an idea of the trouble he’s set to face in the tumultuous term ahead.

In the same mouthful as declaring his election win on Sunday, Mr Turnbull was forced to concede he wouldn’t be able to deliver on an election promise — the first of what looks like many concessions the newly elected Prime Minister will have to make after leading the Coalition to the tightest of victories.

“Regrettably, several ministers have not been returned and so there will be some changes.”

Reshuffling his front bench and replacing fallen ministers will be the first challenge the reinstalled Prime Minister is likely to face as his government begins to take shape.

Throughout the election campaign, Mr Turnbull was insistent the “strong, stable” government he pitched would come with a front bench Australians were already familiar with, but, of course, the vote didn’t quite go as he had planned.

While most senior cabinet ministers are expected to hold on to their positions, fallen junior ministers Wyatt Roy and Peter Hendy — both key Turnbull backers who were instrumental in his toppling of former PM Tony Abbott — will have to be replaced.

Tourism Minister Richard Colbeck is also battling to retain his seat in the Senate.

Mr Turnbull yesterday said the new parliament would showcase “many new and younger faces”, and there have been suggestions he’ll want his frontbench to reflect this with the elevations of rising conservative stars.

The promotions would placate the coalition’s right wing, but leave the leader with a party room leaning less in his favour.

With suggestions surfacing Health Minister Sussan Ley may be shifted sideways from the senior portfolio, the PM will also have to carefully consider gender balance in the party’s senior ranks as he could face criticism if he was seen to be demoting one of his few female frontbenchers.

Mr Turnbull will also have a slightly more powerful Nationals leader to deal with as the parties work together in the Coalition Government.

Thanks to the rural party picking up an extra seat while the Liberals lost at least a dozen, the Nationals find themselves with some extra bargaining power.

The party’s leader and Deputy Prime Minister Barnaby Joyce will use this as leverage while reaching a new coalition agreement, which must be finalised before the Turnbull government can be sworn in.

Mr Turnbull has time on his side while considering his new cabinet as the Governor-General Peter Cosgrove is on an official visit to France over the next week.

It’s expected Liberal and National MPs would meet in Canberra on July 18.

But while Mr Turnbull will have already had to clear a few roadblocks to get there, the real trouble won’t start until parliament resumes.

The Prime Minister will have a crossbench including four independents with conflicting agendas to contend with in the lower house.

In the upper house, a crossbench of an estimated nine Senators, all with diverse views, will prove especially difficult for the government when trying to pass legislation.

While one of Mr Turnbull’s goals in calling the double dissolution election was to clear out the Senate with its eight crossbenchers. But commenting on the backfire yesterday, he played the difficulties he’s endured from the diverse senate line-up.

“There are always crossbenchers in the Senate. There is always going to be,” he said.

“Now we don’t know who is going to be in the Senate yet and indeed there are a number of seats in the House of Representatives that are yet to be finally determined although we have a higher level of confidence about almost all of them.

“So as to what the numbers will be, we await the determinations of the AEC and of course many of these Senators — future Senators — will have open minds on this issue and will remain to be convinced on the merits of either side of the argument.”