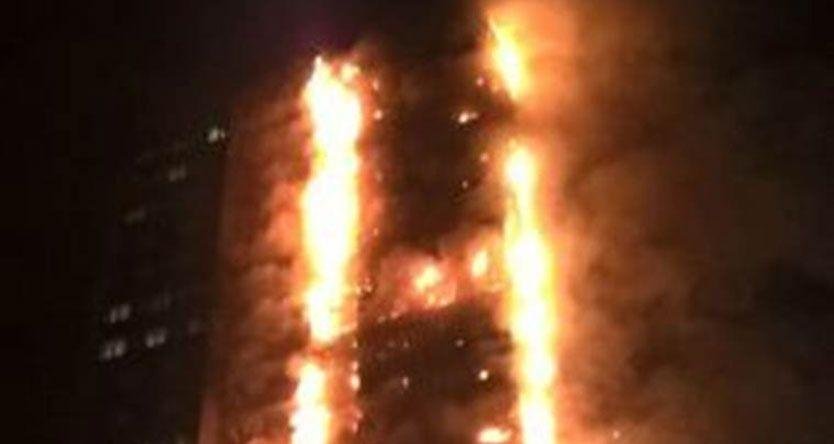 London Fire Brigade said on Twitter that 40 fire engines and 200 firefighters were trying to douse the fire at Lancaster West Estate tower block.

A fire broke out in a 27-storey tower in west London on Wednesday morning with reports that residents are trapped inside their homes. The fire accident took place in Latimer Road’s Grenfell Tower located in White City district. London Fire Brigade said on Twitter that 40 fire engines and 200 firefighters were trying to douse the fire at Lancaster West Estate tower block. The fire brigade department issued a statement saying the fire had spread from the second floor to the top floor of the building.

Metropolitan Police, present at the scene, have asked people to stay away from the area for now. Police also said the residents are being evacuated from the tower block and a number of people are being treated for various injuries. London Ambulance Service said it has sent “a number of resources” for the North Kensington fire. London Mayor Sadiq Khan has issued a brief statement saying ‘major incident’ is declared at the Grenfell Tower in Kensington. Watch latest videos, photos of London fire here.

The Guardian has reported that the tower contains close to 120 homes. George Clarke, a British architect who lives near the tower, told Radio 5 in an interview that he saw “the glow through the windows.”

“I’m getting covered in ash, that’s how bad it is. I’m 100 metres away and I’m absolutely covered in ash. The guys are doing an incredible job to try and get people out that building, but it’s truly awful,” he said. Residents on the higher floors were reportedly flashing torchlights to be rescued.

In a statement posted on Facebook, Assistant Commissioner for Fire Safety Dan Daly said: “Firefighters wearing breathing apparatus are working extremely hard in very difficult conditions to tackle this fire. This is a large and very serious incident and we have deployed numerous resources and specialist appliances.” The cause of the fire has not been ascertained yet.

According to BBC, those present at the scene reported falling of debris, loud explosions and shattering of glass. BBC correspondent Andy Moore added there are fears the tower might collapse. In 2016, residents organisation Grenfell Action Group claimed that the tower had a “serious health and safety issue.” The group had alleged that the residents of Grenfell Tower did not receive any proper fire safety instructions from the KCTMO. “A catastrophic event will expose the ineptitude and incompetence of our landlord, the KCTMO,” it wrote in another blog post.