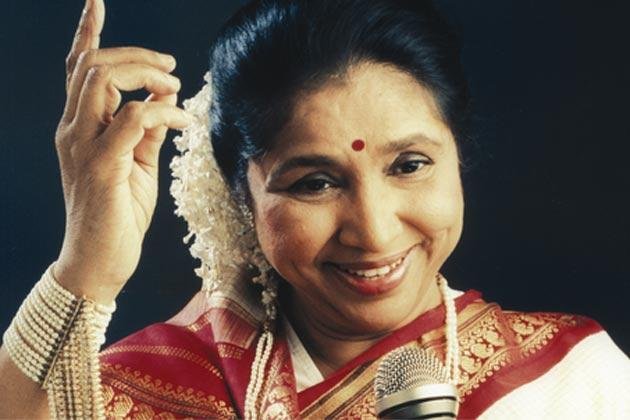 Veteran singer Asha Bhosle is one of the most recognized female Indian voices all over the world. Music is in her blood, her beautiful voice has been mesmerizing music lovers for the past seven decades. She sang over a thousand songs in twenty different languages. Asha Bhosle has recorded over 12,000 songs and is featured on the soundtracks of more than 800 films. Her voice is recognized by a billion people in South Asia and around the world. She won many national and international awards including seven prestigious Filmfare Best Female Playback Awards. Government of India honoured  her with the Padma Vibhushan. In 2011, the Guinness Book of World Records officially acknowledged her as the most recorded artist in the history of music. Asha Bhosle sang with Boy George and Stephen Lauscombe. In 1997, she sang a love song with the boy band Code Red, she also recorded the song ‘The Way you Dream’ with Michael Stipe that was used in the English movie, Bulletproof Monk. In late 2006, Asha sang with Australian test cricket star, Brett Lee.

Here is the interview with legendary Asha ji-

RR- Asha ji, you started singing at a very tender age of 10, and you have been singing for the past 72 years. How do you feel at this stage of life and who would you give credit for your successful career?

Asha– I would say God, God has helped me in choosing my career path and has blessed me all the way up to here.

Asha- I have got many awards but people’s love and appreciation is the biggest award for me. People love me, they want to listen to my songs, they ask me to sing, and that’s what matters to me. Awards are given and forgotten very quickly but remaining in people heart has been possible only through my songs.

RR- You have sung thousands of songs and are still singing, what is the secret of your sweet and beautiful voice?

Asha– I would give credit to my father and God. My father was a great singer and I have got this talent from him. I worked hard, practiced every day and kept on learning new styles.

RR- You are known for versatility. Your repertoire of songs extends much beyond the Hindi film music, you have sung pop, ghazals, bhajans, traditional Indian classical music, folk songs, qawwalis, and Rabindra Sangeets. Apart from Hindi, you have sung in over 20 Indian and foreign languages. Which genre of music do you like the best?

Asha- I love singing all sorts of songs with good lyrics and styles. I like to listen to western music too. I have sung in many foreign languages as well but my base is classical music.

RR- You sang for many music directors from O P Nayyar (1952) to A R Rahman (1994). You also travelled internationally. What was the most beautiful moment in your life?

Asha- It is very hard to say (pause) the most beautiful moment in my life was when MY BABY WAS BORN and I took him in my lap. Giving birth can be one of the most fulfilling experiences in a woman’s life. Isn’t it? (laughs). Then

I was happy when I got an opportunity to sing good songs, which became popular.

But nobody’s life is ever smooth, all of us go through sad and happy moments from time to time, God balances everything. Lord Krishna rightly said, “we were not born with anything and we will not take anything with us when we die. Don’t worry about yesterday and tomorrow, live just one day at a time, surrender yourself to me and do your Karma.”

RR- I have heard that your second love is cooking and you have opened a chain of restaurants in the name of ‘ASHA’ in London, Dubai and Kuwait. Do you have any plan of opening your restaurant in Sydney?

Asha- (laughs) yes, I would love to. Let’s wait and see what happens. Branches were opened in Manchester and Birmingham in last year. I train my staff when I am asked to, especially I teach them my special recipes.

RR- Since we are talking of food, I ask you a personal question, what is your favourite food or sweet?

Asha- I am not very fond of sweets but sometimes I eat Bengali Mithhai.

RR- You sang Ghazals in ‘Umrao Jaan’ for Khayyam sahib for the very first time and they became very popular. How did that happen?

Asha- When I was asked to sing those ghazals, I read Umrao Jaan’s story and assumed myself in her character while singing.

RR- Please sing a something for us.

This is a duet.

RR-Your life was full of struggle and you went through so much. (Asha ji lost her husband, son and daughter in the past few years) What keeps you inspired?

Asha- I had hard times, things were not easy. Many people I came across and trusted were not good but music kept me alive. Music inspired me. When I enter studio, I leave all my worries and sorrows outside and perform to the best of ability. It was God’s will and I was born to sing.

RR- What’s your message to the readers of the Indian Telegraph?

Asha- I am not a minister and can’t give a speech. What I would say to music lovers is listen to good music/songs and give your children a taste of it. These days all sorts of music is being produced, good and not so good but it is our choice.

I can’t wait to see you all on 14th of March at Opera House, please come and enjoy the concert.