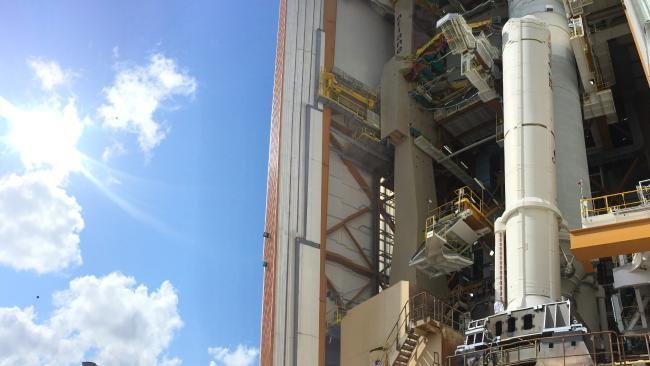 THE National Broadband Network is getting set to launch its second satellite into orbit as the company continues its mission to address what’s been dubbed as the digital divide in Australia.
NBN Co. will launch its second Sky Muster satellite from French Guiana Space Centre in South America on October 5.
Joining the company’s first satellite, the huge spacecraft is set to orbit 36,000km above Earth and will provide improved internet access to Australians in rural areas.
The two NBN satellites will have a combined capacity of 135 gigabits per second and provide services to some 400,000 homes and businesses in regional and remote Australia.
While there is still plenty of room on the company’s first satellite, the launch of Sky Muster II is “largely for the new people coming on” to the NBN, the satellite’s lead architect Julia Dickinson said.
The timing of the launch is designed to give the company ample time to test the satellite and have it ready to go when needed, and will allow users to migrate off an interim satellite service set to be decommissioned in 2017.
“Now we’ll just be able to add additional customers until we get the expected take up of around 240,000 premises by 2020,” Ms Dickinson said.
The NBN’s first satellite launched 10 months ago but retailers only began selling the service in April, giving thousands of rural Australians a significant and much needed boost in their internet capabilities.
For those in rural areas struggling with poor internet connections the NBN Sky Muster will be a “game changing service”, Ms Dickinson said.

“They (the satellites) are making a huge difference compared to what little service people have had, and it will allow them to take advantage of the benefits that other people take for granted, and are so important.”
That sentiment was echoed by Alicia Garden, CEO of Grain Growers which represents the country’s grain producers. She said the service would provide a much needed boon for Australia’s farmers.
“It will enhance connectivity standards to improve the efficiency and profitability of Australian farming by changing the way farmers do business — in particular their capacity to collect, analyse and apply agriculture data,” she said.

After switching onto the NBN Sky Muster service in April, western Queensland grazier Kristy Sparrow said her internet was performing about five times faster than the mobile broadband she had previously relied upon.

“I updated everything and I’ve just been giving it a good workout,” she told the ABC. “It will be great for our business.”

Andre Toulon lives in the rural Western Australian town of Manjimup and connected to the original Sky Muster satellite in May and says the speeds have been a big improvement.

“The NBN Sky Muster has enabled us with far higher speeds. The speeds quite frankly are fantastic — don’t have a problem with that at all,” he told news.com.au in June.

However the small data allowances that come along with being connected via satellite have been frustrating for him.

“The plans that come with it allow an absolute maximum of 150 gigabytes of bandwidth a month and that can be split in many different ways but the most suitable one is really the most expensive,” he said.

According to Ovum, which was hired by NBN Co. to examine the performance of the company’s Sky Muster satellites against similar broadband products around the world, the NBN’s $1.8 billion satellite program stacks up very well.

“On an affordability basis, Australian retail plans based on NBN’s Sky Muster service are available at close to the best global pricing on a price per GB basis,” the report said.

Ms Dickinson urged those connected to NBN satellite with any issues to speak to their retailer provider.

“The bandwidth and the wholesale speed tiers that we provide to our retail service providers have been set. It’s up to the retailers, they’ll model their plans to suit their customers,” she said.

She also asked for patience from those in rural areas waiting to have available access to the NBN.

“By the nature of this service we are providing it to the most remote and regional areas in the country so it does take time and we’re asking people to work with us and bear with us while we try to get to everybody as quickly as we can.”

The NBN currently has about 600 technicians on the ground working to carry out the necessary instillations for customers to connect to the new 6400kg satellite.