What are Kevin Rudd’s chances of securing the plumb UN role? 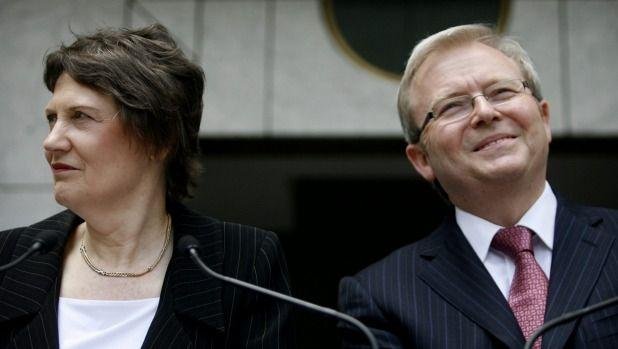 KEVIN Rudd faces an uphill battle to become United Nations secretary-general, but he should not be counted out.

One of the United Nation’s best known analysts, Richard Gowan of the European Council on Foreign Relations, believes if the Australian cabinet approves the former prime minister’s bid for the prized role a path to success could open up.

Mr Gowan said vetoing candidates by permanent members of UN Security Council including the US, UK, Russia and China, could lead Mr Rudd to victory.

“The US is generally believed to be backing an alternative candidate, Argentinian foreign minister Susana Malcorra, while the UK has given (former New Zealand Prime Minister) Helen Clark its early backing,” Mr Gowan told AAP on Monday.

Mr Gowan believes Ms Clark is a frontrunner and it will be difficult to nudge her out of the running.

“Rudd will have to explain why Australia’s two main western allies are supporting other people,” he said.

“Equally, the fact that the US and UK are apparently behind Malcorra and Clark might play to Rudd’s advantage down the road.

“There is a good chance Russia or China will veto the leading western candidates early on, allowing Rudd to step up.”

Once all nominations are received, the Security Council, made up of the five permanent members of China, Britain, France, Russia and the US, will have the power to veto candidates.

Russia has been insisting on the election of an Eastern European candidate while China has not given much away about its preferred candidate.

“If there is any hint that China votes to discourage Rudd in the upcoming UN straw polls his candidacy is in a lot of trouble, because his command of Mandarin and close contacts in Beijing are meant to be his greatest strength,” Mr Gowan said.

One of Mr Rudd’s disadvantages is the widespread sense at the UN that he has “tepid” support in Australia.

According to The Australian, Malcolm Turnbull’s government is likely to endorse Mr Rudd for the position by drafting a letter of support, but may not commit to a diplomatic campaign.

Once nominated, it may be left up to Mr Rudd to run his own campaign to woo the UN Security Council, which consists of five permanent members and 10 temporary members.

While Mr Rudd may benefit from countries vetoing other candidates, he does still face some significant headwinds.

Leadership of the UN is generally rotated between different regions and some consider it Eastern Europe’s turn to head the organisation.

Some credible candidates include the Bulgarian head of UNESCO, Irina Bukova, and the former president of Slovenia, Donald Turk. But one factor working in Mr Rudd’s favour is the conflict between Russia and Ukraine, which may see countries vetoing European candidates seen to be pro-Russian or pro-Western.

There are also calls for the role to go to a woman, with the US ambassador to the UN, Samantha Powers, calling for a female candidate.

Ms Clark and Ms Malcorra are seen as frontrunners.

While Mr Rudd does seem to have a decent chance of becoming the UN’s next leader, some in his own party are concerned about unleashing him on the world.

Former NSW premier Kristina Keneally told SkyNews that Mr Rudd was a “psychopathic narcissist” and not fit to be the UN secretary-general.

“That’s not just my opinion, that’s the opinion of a whole range of people who are currently sitting in the parliament,” she said.