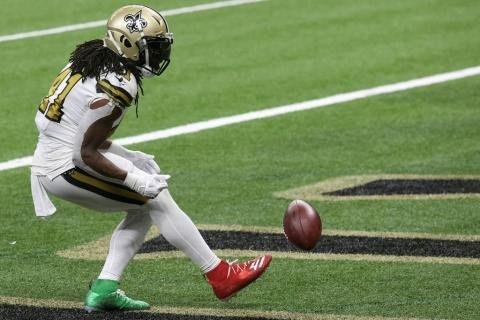 Alvin Kamara ran for 155 yards and an NFL record-tying six touchdowns to lead the New Orleans Saints in routing Minnesota 52-33 on Friday in an NFL Christmas contest.

Kamara carried 22 times and caught three passes for 17 yards while scoring on runs of 40, 7, 6, 5, 3 and 1 yards then credited his offensive line blockers for opening holes in the Vikings defensive line.

“It’s a good day,” Kamara said. “The O-line, kudos to them. They get the game ball for sure. I did a small part. They did the rest.”

Kamara matched the all-time NFL record for rushing touchdowns in a game set by Ernie Nevers of the Chicago Cardinals in 1929 in a 40-6 victory over the Chicago Bears.

The Saints (11-4) clinched a fourth consecutive NFC South division title, having already secured their place in the NFL playoffs, while the Vikings fell to 6-9 and were eliminated from post-season contention.

“We still have got so much more room to grow,” Kamara said. “Every week we’re looking to get better. We want to do more. We’re tasting greatness. We’ve still got a long way to go.”

Kamara has 21 touchdowns this season, including a team-record 15 rushing touchdowns.

Minnesota’s Mike Boone responded with a 4-yard touchdown run but Kamara scored on a 5-yard run with 38 seconds remaining in the second quarter to lift the Saints ahead 24-14 at halftime.

A deflected Drew Brees pass was intercepted by the Vikings’ Hardy Nickerson, giving Minnesota the ball at the Saints’ 18-yard line, and that set up a 2-yard touchdown pass from Kirk Cousins to Irv Smith, although a missed conversion kick left the visitors trailing 24-20.

The Saints answered with a 10-play, 74-yard drive that ended with Kamara’s 6-yard touchdown run as New Orleans seized a 31-20 advantage.

Smith made his second touchdown grab on a 4-yard pass from Cousins to trim the Vikings’ deficit to four entering the fourth quarter, but had two touchdown runs, the record-equalizer coming from three yards with 1:50 remaining.

Taysom Hill scored on a 1-yard run for the other Saints touchdown.