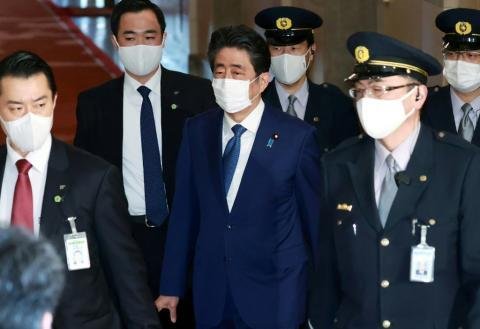 Japan’s former prime minister Shinzo Abe apologised to lawmakers on Friday over a scandal involving payments for supporters, a day after prosecutors said they would not indict him in the case.

The country’s longest-serving prime minister has denied any wrongdoing, but acknowledged that he had made statements to parliament that were subsequently shown to be false.

“It turned out that I gave explanations that are contrary to the facts,” Abe said at the lower house.

“Even though I was not aware of it, I feel a moral responsibility. I deeply regret this and apologise to my fellow lawmakers,” he added.

The case revolves around dinners organised on the eve of government-sponsored cherry blossom viewing parties.

Abe will not face prosecution over the scandal, but appeared before lawmakers to apologise for making false statements
JIJI PRESS / STR


His office is alleged to have paid more than eight million yen ($76,000) for the dinners attended by supporters over five years until 2019, failing to report the expenditures as required by Japanese law.

Abe had previously denied that his political office had paid for the dinners.

He was questioned by prosecutors over the case, but on Thursday they said they would not take further action against him.

Abe held a press conference on Thursday for the first time since he resigned earlier this year over health reasons, apologising but insisting he had no knowledge of the payments.

He said he “deeply, deeply” apologised for falsely claiming his office had not paid.


“My political responsibility is very serious. I will do my utmost to regain the people’s trust,” he said.

“You have no intention of finding out the truth at all, and no intention of explaining to the public,” said Takahiro Kuroiwa of the Constitutional Democratic Party of Japan (CDP).

“In a private firm, if the president makes false statements 100 times, then makes an excuse saying he or she was deceived by an employee, is it forgiven?” added Kiyomi Tsujimoto, another CDP lawmaker.

“Why don’t you step down as a lawmaker?” she demanded.

Abe’s successor, Prime Minister Yoshihide Suga, has also apologised for making statements about the payments that turned out to be false.

While Suga is not expected to face prosecution, it comes at a bad time for his cabinet, with his approval ratings sinking in part over his handling of a third wave of coronavirus cases.

Abe weathered several scandals while in office, including over the cherry blossom parties, a decades-old tradition intended to honour the great and good for their achievements.

His government was accused of packing the event with supporters, and even inviting a member of Japan’s infamous Yakuza mafia.

While the government denied wrongdoing, Suga has said he will not hold the event next year.