Indians Will Have To Wait Decades For Green Card Amid Backlog: Congressional Report

A Green Card allows a non-US citizen to live and work permanently in America. 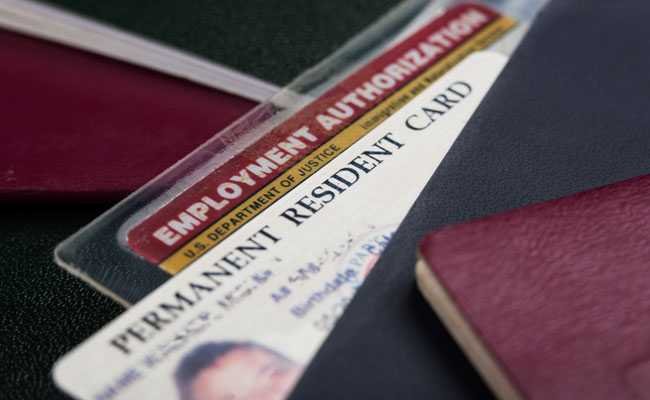 Employment-based backlog for legal permanent US residency is expected to double by 2030 and Indians will have to wait for decades for the coveted Green Card, according to a latest Congressional report.

A Green Card allows a non-US citizen to live and work permanently in America.

Indian IT professionals, most of whom are highly skilled and come to the US mainly on the H-1B work visas, are the worst sufferers of the current immigration system which imposes a seven per cent per country quota on allotment of the Green Card.

The Congressional Research Service (CRS) report said that the time frame would reduce a bit even if the per country cap on its allocation is removed by the Congress.

Almost 1 million lawfully present foreign workers and their family members have been approved for, and are waiting to receive, Lawful Permanent Resident (LPR) status (a Green Card). This employment-based backlog is projected to double by fiscal 2030, the report said.

The back log exists because the number of foreign workers sponsored by US employers for Green Cards each year exceeds the annual statutory Green Card allocation. In addition to this numerical limit, a statutory seven per cent per-country ceiling prevents the monopolisation of employment-based Green Cards by a few countries.

For nationals from large migrant-sending countries – India and China – the numerical limit and per-country ceiling leads to inordinately long wait for employment-based green cards. New prospective immigrants entering the backlog (beneficiaries) outnumber available Green Cards by more than two to one, it said. “Many Indian nationals will have to wait decades to receive a Green Card. The backlog can impose significant hardship on these prospective immigrants, many of whom already reside in the United States. It can also disadvantage US employers, relative to other countries” employers, for attracting highly trained workers,” the report said.

The CRS report is based on the analyses of its projects about the 10-year impact of eliminating the seven per cent per country ceiling on the first three employment-based immigration categories: EB1, EB2, and EB3. It models outcomes under current law and under the provisions of S. 386, as amended.

The bill would phase out the per country ceiling over three years and reserve green cards for certain foreign workers, but it would not increase the current limit of 120,120 Green Cards for the three employment-based immigration categories.

According to CRS, the analysis projects similar outcomes for all three employment-based categories: Indian, and to a lesser extent Chinese, nationals in the backlog would experience shorter wait times under S 386 compared with current law.

“The bill would eliminate current EB1, EB2, and EB3 backlogs in 3, 17, and 7 years, respectively, with modest differences by country of origin. Subsequently, new prospective immigrants would receive Green Cards on a first come, first-served basis with equal wait times within each category, regardless of origin country,” the CRS said.

“By FY2030, EB1, EB2, and EB3 petition holders could expect to wait 7, 37, and 11 years, respectively. Maintaining the seven per cent per-country ceiling, by contrast would substantially increase the already long wait times for Indian and Chinese nationals, but it would continue to allow those from elsewhere to receive Green Cards relatively quickly,” CRS report said.

Majority of Indian-Americans in H-1B visa category who apply for green card are either in EB2 or EB3.

“The total backlog for all three categories would increase from an estimated 915,497 individuals currently to an estimated 2,195,795 individuals by FY2030. These outcomes would occur whether or not S 386 is enacted, because the bill maintains the current limit on number of green cards issued,” the CRS said.