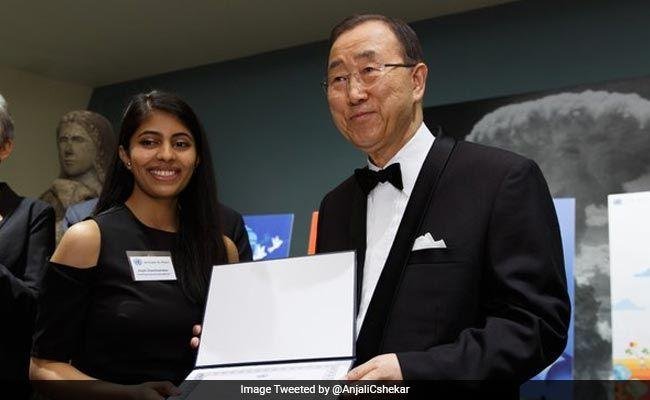 UNITED NATIONS:  A 22-year-old Indian artist is among the three winners of a UN poster competition aimed at raising awareness about nuclear disarmament, with her poster of a peace dove slicing through a nuclear weapon garnering appreciation from UN Secretary General Ban Ki-moon.

Anjali Chandrashekar, a New York-based designer and “artivist”, won the third prize in UN Poster for Peace contest presented by the UN Office for Disarmament Affairs (ODA) to raise awareness of the need for nuclear disarmament.

Titled ‘Cutting Barriers through Peace’, the poster features a peace dove slicing through a nuclear weapon.

Another poster ‘Break Free’ by the Chennai girl, that shows doves flying out of a bird cage at the top of a nuclear weapon, received an honorable mention.

She received her third-prize certificate from Ban Ki-moon at an award ceremony held in United Nations on May 3. Apart from the three winners, nine honorable mentions were chosen from among more than 4,100 entries representing 123 countries.

The young artist was only 10 when she founded ‘Picture It’, a non-governmental organisation that uses imagery to raise awareness and funds for various health, humanitarian and environmental causes.

“Nuclear disarmament is usually spoken about on such a high level and I believe that art has the power to humanize some of the most pressing issues that the world faces today,” she told the UN News Centre.

“It also transcends barriers of age, language and literacy so I thought this was a great opportunity for me to show that a brush can be mightier than arms.”

The first prize went to 38-year-old Ivan Ciro Palomino Huamani from Peru for his ‘Spinning Peace’, which features a nuclear weapon being unraveled into string which is then used to fly kites and balloons, and to jump rope.

Second place winner, 15-year-old Michelle Li, named her poster ‘Peace in our Hands’, which features a shadow puppet of a peace dove above a broken nuclear weapon.

Congratulating the winners, Ban Ki-moon said he commends them for the “talents you have displayed, and for using those talents to highlight such an essential cause.”

“At a time of many global needs, it is important that young people are aware of the threat posed by nuclear weapons, and the vital importance of disarmament. Young people did not create nuclear weapons, but it may be their task to eliminate them once and for all. The energy and enthusiasm, talent and new ideas we see here today will help to meet that challenge,” he said at the award ceremony.

Actor Michael Douglas, a UN Messenger of Peace, said that “creativity is essential” to creating momentum for nuclear disarmament.

The competition was organised to commemorate the anniversary of the very first UN General Assembly resolution adopted in 1946 establishing a Commission to deal with problems related to the discovery of atomic energy.