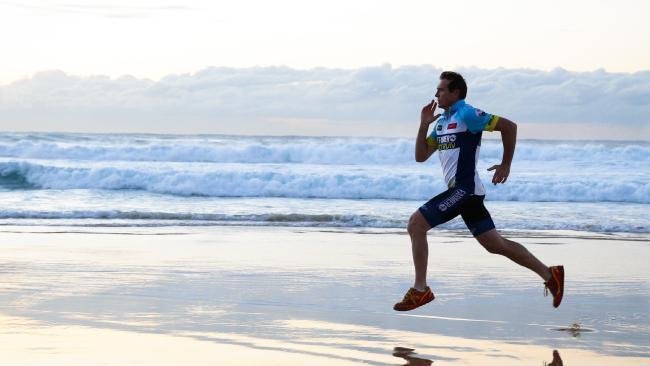 Australia’s ultra-marathon running legend, Pat Farmer AM, today announced he will run the length of India, covering 4600km in 60 days.

The Spirit of India Run will begin on 26 January 2016 – a significant date for both countries, marking Australia Day and India Republic Day.

Starting in Kanyakumari, Tamil Nadu at the most southern point of India, Pat will head north, running an average 80km each day, but it won’t be your usual daily run.
Pat hopes to reach Srinagar, Kashmir on 26 March 2016.

Along the way he will run through busy cities, rural towns and coastal villages, stopping to speak with school students, business leaders and community representatives at receptions most evenings.

He will pass through landmark cities such as Mumbai, Surat, Ahmedabad, Udaipur, Ajmer, Jaipur, Agra with its Taj Mahal, New Delhi and Chandigarh.

Pat’s aim is to promote goodwill, friendship and trade between Australia and India, while also highlighting and raising funds for girls’ education in India.

“Young girls grow up to be the mothers of the next generation, they are the first educators to their children and I believe every girl should have access to basic literacy skills as education is the way to change their world and ours,” said Pat.

“My goals are to raise $100,000 to support the education of girls in India through The K.C. Mahindra Education Trust and to showcase this amazing country and its people.

“Our nations have so much in common and we share many traits – this run is about bringing the people of our nations closer together and helping children most in need to change their future.”

The Spirit of India Run has the support of both Australian and Indian Governments.

“I wish Pat all the very best for the Spirit of India Run and support his efforts to highlight the strong people-to-people links between our two countries,” the Minister said.

“I know the people of India will be just as inspired by Pat’s efforts as his fellow Australians are.”

“Hats off to Pat for embarking on this epic project,” said the High Commissioner.

“As he traverses the length of India, Pat will witness its ancient civilization, its immense diversity, its incredible natural beauty and its vibrant culture. In two action-packed months, he will truly capture the Spirit of India!”

“This is a once in a lifetime opportunity to get inside the heart and mind of Pat Farmer and the human spirit which will take him through a dramatic run across India,” said Anupam.

“Through the film and the TV off shoots we will be looking at India through the eyes of an Australian, which will go a long way in showcasing more of India’s rich diversity to Australians and continue to build Indian-Australian relations.”

To follow Pat’s Spirit of India Run and donate to The K.C. Mahindra Education Trust, simply go to patfarmer.com.au.

Who is Pat Farmer

Pat Farmer is a multiple world record holder for endurance running. He has run from the North Pole to the South, and across Australia, New Zealand, Vietnam and North America. Pat served 8 years as a Member of Australia’s Parliament, with 3 years as Parliamentary Secretary for Education, Science and Training. Winner of ‘Achiever of the Year’ (2000), awarded by Prime Minister John Howard. Pat has raised millions of dollars for causes during his 20 year running career, including Lifeline, Cancer Council, Australian Red Cross and Diabetes Australia. Newly married to Tania Moran, Pat is also a father to two children, Brooke and Dilon.
His ultra distance running career has included:
2012-2013
· Pole to Pole Vietnam. Raised funds for the International Red Cross by running the length of Vietnam, and to highlight the 40th anniversary of the Relationship agreement between Australia and Vietnam. Symbolically Pat an Australian Runner and Huy Mai a Vietnamese runner completed the 3000km journey together.
2011
· Trekked from the North Pole to the South Pole. Ran two marathons every day, for almost a year, over 13,000 miles through 14 countries and raised $100 million for the International Red Cross.
2006
· Re-visited his 24hr vertical climbing record up AMP Tower with Tony Abbott, raising over $500,000 for the Millennium Foundation’s ovarian cancer research program at Westmead Hospital.
1999
· Established fastest Around Australia Long Run Record of continuous running in 191 days and 10 minutes (around 6 months) over 14,662.4km during his Centenary of Federation run.
· Set a new World 10,000km Record in 129 days.
· Broke a long standing Australian record of more than 13,383km in 174 days.
· Set a total of 10 international records including the Western Australia border to border run, the Brisbane to Darwin run, and the world record for the longest tropics run (6,307km in 83 days).
1998
· The first person to run 24 hours vertically climbing both up and down (at Sydney’s AMP Tower equivalent to running up Mount Everest in 24 hours)
1995
· Pat finished fourth in the Trans America Road Race despite running 50 days with a stress fracture in his leg
1993
· A virtually unknown Pat Farmer secures second place in his first attempt at the Trans America Road Race
Other achievements:
· Twice-world record holder for crossing the Simpson Desert
· Ranked third in the world for 1,000 miles on a track
· Ran 2,500km around NSW for charity in 42 consecutive days
· Numerous international and national ultra marathons, including the first 1,000mile track race in Australia – the second race of its kind anywhere in the world.
· Pat was named Achiever of the Year in the Australia Day Awards in 2000