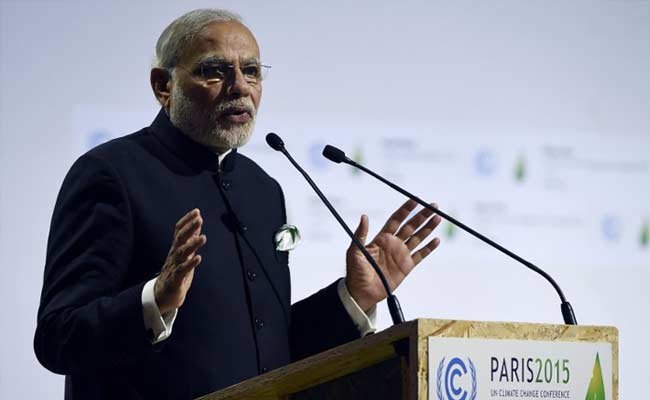 Paris: Prime Minister Narendra Modi today told the global climate summit in Paris that while India has set advanced targets to cut carbon emissions and switch to clean energy, it is the developed countries that should take the lead in countering climate change.

Addressed the 21st session of the Conference of Parties or COP21 in Paris, PM Modi said, “We hope advanced nations will assume ambitious targets and pursue them… We look to the developed countries to mobilise $100 billion annually by 2020 for mitigation and adaptation.”

The Paris summit aims to forge an elusive agreement to curb global warming by limiting the emission of greenhouse gases and the US has contended that India should make firm commitments in this regard.

Today, PM Modi said India is a developing country “that needs to grow rapidly to meet the aspirations of 1.25 billion people — 300 million of whom are without access to energy”.

“Climate justice means developing countries should have enough room to grow,” the Prime Minister said. “This means mitigating actions, removing conditions, revisiting targets… The principles of equity and common but differentiated responsibilities must remain the bedrock of our collective enterprise.”

Still, India, he said, will take significant steps to reduce emissions by 35% of 2005 levels by 2030 and only 40% of our installed capacity will be fossil fuels. India will expand renewable energy, enlarge forest cover, reduce dependence on fossil fuels and transform public transportation in cities.

The question of having a consensus on a single policy to counter global warming has been fraught with bickering over two decades.

In 1997, Kyoto Protocol — a resolution formed after a climate conference in Japan — set binding targets for carbon emission. But the US never accepted the Kyoto protocol. Several other countries who signed the agreement also pulled out. Since then, developed nations have taken few steps to significantly cut carbon emissions.

In 2009, the COP15 in Copenhagen decided that up to $100 billion will have to be given in aid to help developing countries to reach their emissions goals by 2020.