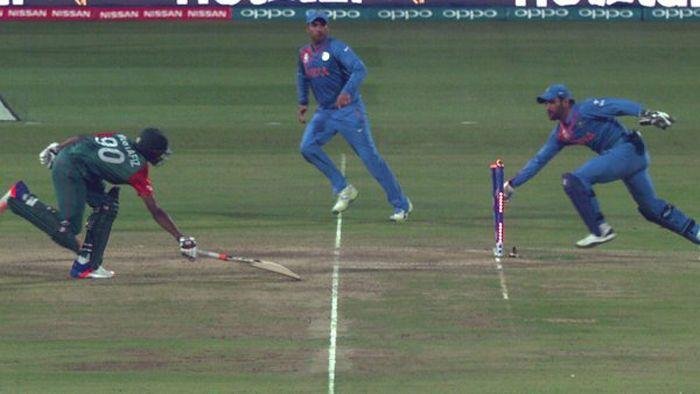 India’s dreams of winning the World Twenty20 at home remained alive after a heart-stopping one-run victory gave them a second victory in the Super 10 Group 2.

An insipid batting performance for the second match in succession pushed them to the edge of elimination before three wickets in the final over produced a thrilling victory.

After managing only a below-par 146 after Bangladesh skipper Mashrafe Mortaza elected to bowl, India were poor on the field. Jasprit Bumrah, Ashish Nehra, R Ashwin and skipper MS Dhoni dropped catches, some of them difficult but needed to be taken if India were to somehow escape with victory.

Bangladesh needed 11 runs off the final over, which Hardik Pandya was asked to bowl. Mushfiqur Rahim hit two successive fours leaving just two runs to get off the last three deliveries. Both Mushfiqur and Mahmudullah lofted catches off the next two deliveries to deep midwicket, where Shikhar Dhawan and Ravindra Jadeja made no mistake.

Bangladesh needed two runs to force a tie, but Pandya bowled wide to beat Shuvagata Hom and Mustafizur Rahman was run out by Dhoni going for the bye that would have tied the game and forced the Super Over.

The win keeps India on course, and a victory over Australia in the final league game on March 27 will see them through to the semifinals behind leaders New Zealand. Their poor net run rate will leave India in a tricky situation if Pakistan defeat Australia.

In the opening match, New Zealand proved the smarter side, picking that third spinner and successfully defending a low total. Although India successfully chased against Pakistan, thanks to Virat Kohli’s brilliant knock, Bangladesh again out thought India.

While the slow pitch demanded that India play a third spinner, the hosts persisted with Jasprit Bumrah, who was ineffective and also struggled on the field. As the match panned out, Harbhajan Singh’s ability to restrict the scoring and sheer experience would have made a big difference.

Nine years ago, Masrafe Mortaza’s four-wicket haul enabled Bangladesh to contain India to less than 200 as they caused the biggest upset in the 2007 50-over World Cup. At the Queen’s Park Oval that sunny afternoon, the Bangladesh batsmen then smashed the Indian bowling to all parts of the ground. The defeat and the loss to eventual finalists Sri Lanka, eliminated India and put Bangladesh in the second stage.

The Chinnaswamy Stadium pitch was in contrast to the Trinidad track. The Oval track was full of runs, which the India batsmen failed to exploit against an equally smart approach by Bangladesh on the field. The Bengaluru pitch had far more bounce when West Indies defeated Sri Lanka but on Wednesday it was sluggish. There was hardly any bounce.