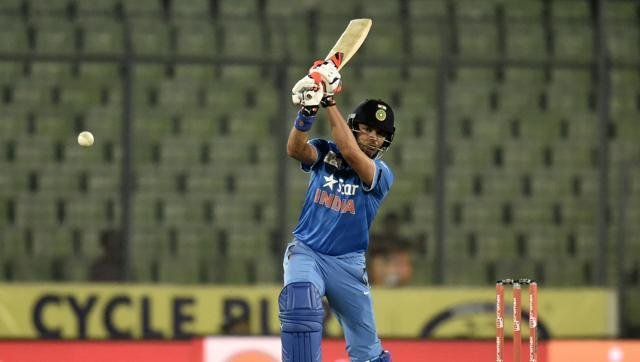 It was a much-awaited debut, and after warming the bench for a long time, left-arm spinner Pawan Negi finally had his day under the sun.

The 22-year-old had created a stir by bagging a bid for R8.5cr, the highest for an Indian in the Indian Premier League (IPL) player auctions.

On Thursday, the day of reckoning finally arrived. The Delhi lad was given a chance against UAE in India’s final league game of the Asia Cup.

The opposition though was an outfit hoping to punch above its weight. India’s balanced setup allowed no room. They brushed aside the challenge by restricting UAE for just 81, before chasing the lowly target with nine wickets to spare.

He was given the ball in the 13th over of the innings. The pacers had already inflicted enough damage, leaving UAE reeling at 42 for three. But once the ball was handed to Negi, it was more about curiosity than interest in the match.

Negi’s first international over was a mixed bag. He conceded 10 runs but also got his first wicket off his fifth delivery.

The slightly flighted delivery was tossed up to entice a false shot, and the ploy worked as Mohammad Usman skied it into the hands of a waiting Harbhajan Singh, and Negi’s joy knew no bounds.

The wicket seemed to have settled his nerves.

He bowled two more overs, and while he couldn’t claim more wickets, he did manage to keep the runs down, finishing with figures of one for 16 in three overs.

Bhuvneshwar Kumar and Harbhajan Singh, who were also tried out on Thursday, had decent outings, with the former picking up two wickets, while the latter took one. In fact, all the bowlers were among wickets but they had the opposition batsmen to thank more than anything else.

The game was being seen as a chance to test those on the bench. The team management used the opportunity to give their back-up bowlers a run, and skipper MS Dhoni seemed satisfied with the results.

“All the bowlers who were given a chance made their mark. Negi was a little jittery in the first over. I don’t blame him, if you’re given your first international game, it does put you in a spot. In his second and third over he seemed more of himself. We wanted him to have a go, because if he is given a chance to play in the World T20, you want them to have their nerves checked out before rather than in the tournament,” he said.