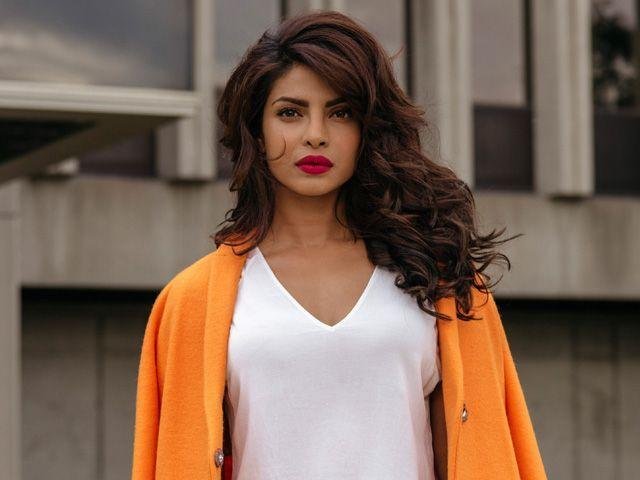 The golden hour on this late September afternoon was anything but. The air was hot and hazy, the sky the colour of the industrial concrete buildings doubling as the set of the FBI Academy.

Then Priyanka Chopra sauntered out of her trailer, a vision in mirrored shades and towering gold stilettos. And suddenly, as if by divine intervention, setting sunbeams pierced through the clouds.

That the sun should oblige this Bollywood actress might not seem unreasonable to her fans in India, where she is one of that nation’s highest-profile celebrities. But in North America, she remains a virtual unknown outside South Asian communities. Now Priyanka, 33, is banking on television to help her crack Hollywood.

“After being in movies for 13 years in India, I’m suddenly a debutante all over again,” she said. “I’m scared and nervous – petrified, actually.”

In ABC’s new drama Quantico,” which debuts September 27, Priyanka plays Alex Parrish, a half-Indian, half-white FBI trainee suspected of masterminding the biggest attack on New York since September 11. The series, which has been described asHomeland meets Grey’s Anatomy (with a bit of How to Get Away With Murder,” because of its many flashbacks), places Priyanka front and centre in an ethnically varied cast.

It’s part of ABC’s continued drive to promote diversity on screen through casting and outreach efforts. In 2012 Priyanka and her manager, Anjula Acharia-Bath, met Keli Lee, executive vice president for talent and casting for ABC Entertainment Group, at a dinner party. As Lee named some of the actors she’d helped place through the company’s diversity efforts – Sofia Vergara in Modern Family, Sandra Oh in Grey’s Anatomy and Kerry Washington in Scandal – Acharia-Bath remarked, “Well, you haven’t done a South Asian yet, and we’re one-fifth of the population.” Afterward, she sent Lee some of her’s movies, and the next thing she knew, a deal was in the making.

“I flew to India to convince Priyanka to work at ABC,” Lee wrote in an email. “I wasn’t going to let distance be a barrier to making a deal.” The one-year commitment required ABC either to develop a project for Chopra or cast her in an existing project. She ultimately read 26 scripts; Quantico was her favourite.

Her audition for the role was her first – ever – and Joshua Safran, the show’s creator, wasn’t sure what character Priyanka intended to read for when she arrived wearing a designer dress and carrying a designer handbag. “She walked in the room, and it was like the molecules shifted in that way that superstars have,” he recalled. “I was very confused because I didn’t know who she was, but we all sat up straighter.”

“Ah, I love that, when it happens at hello,” she said, giggling at the anecdote. “I make sure my walk is a good entrance. My heels and my hair.”

Mr Safran had imagined a protagonist hardened by tragedy and aloof. He hadn’t quite envisioned Alex as a bombshell.

“One of the things we talked about was, ‘Is she so glamorous that she can’t play this regular person?'” said Mark Gordon, one of the show’s executive producers. “What we quickly came to realize is that she’s a huge star internationally, but she’s actually quite regular. She’s very accessible both to women and to men, and that’s especially important at ABC, where a large percentage of the audience is women.”

Off screen Priyanka is somehow unthreatening despite an entourage of assistants and stylists. There are 22 people on “Team PC”: 11 in Mumbai, India, where she owns a home and is a ubiquitous presence on the city’s billboards, and 11 in North America, where a recent pool party at her rental house here gave rise to a spontaneous Bollywoodesque water ballet to Major Lazer’s Lean On.

The child of an Indian army doctor and a gynaecologist, Priyanka moved with her parents every two years until 12, when she decided to live with an aunt in the United States, bouncing among Cedar Rapids, Iowa, New York and Newton, Massachusetts.

A dutiful daughter, she planned to become an engineer. Returning to Bareilly, India, the end of her junior year, she was studying for her university boards when her mother, pleased by her swanlike transformation, sent photos to the Miss India pageant. She won that title and six months later, at 17, was crowned Miss World 2000 – after which her mother wailed, “Who’s going to study now?”

In 2002, Chopra entered the realm of Bollywood, a term she dislikes for its dismissiveness. “Hindi movies are an amalgamation of culture, of emotions, of drama, of music, of dance – which is why Hindi movies are an experience,” she said. “We make about a thousand movies a year and are expanding into markets in Japan and Germany and Russia. We premiere our movies at the Berlinale and Cannes. It’s an amazing time.”

Priyanka has made nearly 50 movies, winning a National Film Award (the Indian equivalent of an Oscar) for her portrayal of a small-town girl turned supermodel in Fashion and lesser prizes for her turn as a 19-year-old autistic woman in Barfi!

That role, for which she had to prove to the director that she could believably subvert her innate allure, is among those of which she’s proudest. “The most challenging thing in India is for her to come out of her glamour zone,” said Irrfan Khan, an occasional co-star and the Indian actor with perhaps the most familiarity in America, with films like The Amazing Spider-Man and Jurassic World.

“Hindi commercial cinema tries to incorporate a beautiful girl in the same roles over and over, but if you’re smart enough you learn to expose your personality. She understands her persona and keeps experimenting in different genres.”

When asked where home is these days, Priyanka replied, “On a plane,” noting she’d spent Labour Day weekend filming in India and would briefly return in October. “I just want to go where my work takes me.”

But for the moment, she’s hoping it’s in the United States. “I simply want the opportunity to show people what I bring with me. They might like it, they might hate it. I don’t know. I just hope that people are inquisitive.”