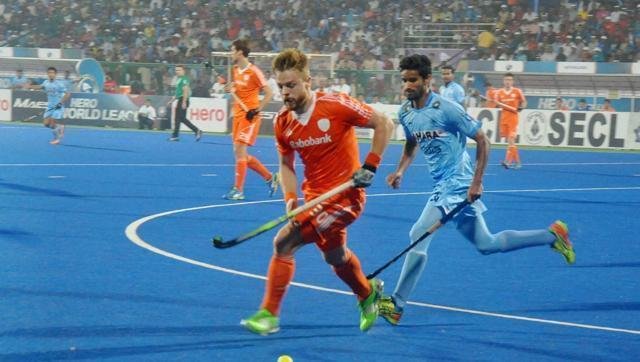 India prevailed 3-2 (5-5) in a penalty shoot-out against the Netherlands to clinch the bronze medal in the Hockey World League (HWL) Final at the Sardar Vallabh Bhai Patel International Stadium in Raipur on Sunday.

Mirco Pruijser (ninth minute), Nicolas van der Schoot (25th) made it 2-0 for the visitors but Ramandeep Singh (39th) and Rupinderpal Singh (47th) brought India on level terms. Ramandeep scored again in the 51st minute to make it 3-2 before Mink van der Weerden scored the third goal for the Dutch.

Rupinder (55th) scored from a penalty stroke and later Akashdeep Singh doubled India’s lead after which van der Weerden scored twice to force the issue to the penalty shoot-out.

In the shoot-out, Billy Bakker, Seve van Ass scored while Jeroen Hertzberger, Pruijser and Valentine Verga failed to find the back of the net.

In the match between the two losing semi-finalists, the Netherlands were off to a very good start in the bronze medal match.

Hertzberger made a diagonal pass to his left to Valentine Verga, whose back-hand cross was deflected to the former. This time Hertzberger’s direct attempt at the goal found a touch from Pruijser before beating Sreejesh as the Dutch took the lead in the ninth minute.

India responded with a strong counter-attack when left-half Danish Mujtaba made a solo run and dodged past four defenders. With only goalkeeper Pirmin Blaak to beat, However, his impressive run was wasted when the Indian midfielder looked in a rush and played a soft and direct shot at Blaak.

The Netherlands doubled the lead when an unmarked Van der Schoot fired the ball high into the roof after he collected a pass from Seve van Ass on the left.

India got two penalty corners late into the second quarter but VR Raghunath and Rupinderpal Singh’s flicks were not up to mark as India went into the break trailing by two goals.

The Netherlands would have run away with the game at the start of the third quarter as Bjorn Kellerman set up twice in as many minutes — first for Hertzberger and second for Pruijser — but their drives were wayward.

It was a big relief for the Indian team and Manpreet Singh did weel to earn a penalty corner but Rupinderpal made a mess of it, wasting another set-piece.

India, urged on by a vociferous crowd, reduced the deficit to one as Manpreet received the ball from Sardar Singh and rolled it in front of the post to Ramandeep, who lifted over goalkeeper Blaak for their first goal in the 39th minute.

The goal sparked a slew of Indian raids as they marched on for the equaliser but the Dutch defence stood tall to deny SV, Sunil and Mujtaba at the close of the penultimate quarter.

India upped the ante from the start as Manpreet stormed into the rival circle and found a foot of a defender, earning a penalty corner. Rupinder atoned for the earlier mistakes by flicking it past Blaak to provide the equaliser for the hosts in the 47th minute.

Ramandeep fired India ahead few minutes later as he tapped in from a close range after captain Robert van der Horst made a rare failure in trapping a cross from Mujtaba.

Later, some desperate attacks from the Netherlands saw them getting a penalty corner that was flicked high past Sreejesh as the match came to even at 3-3.

The response to the Dutch’s equaliser was quick and fast as the hosts earned a penalty corner. Rupinder’s flick found a blockade from the body of a defender as the umpire directed for the penalty stroke. Rupinder converted it to give India the lead again, 4-3.

India’s counter-attack saw them produce a gem of a field goal with Sunil assisting Sardar, who lifted the ball onto the path of the goal before Akashdeep guided it home for the 5-3 lead.

Trailing by two goals, the Dutch didn’t sit back and van der Weerden converted a penalty stroke to make it 4-5 in the 58th minute.

Van der Weerden completed his hat-trick as the 27-year-old produced another masterpiece drag-flick in the final minute to bring them to 5-5, forcing the issue to the penalty shoot-out when India won.