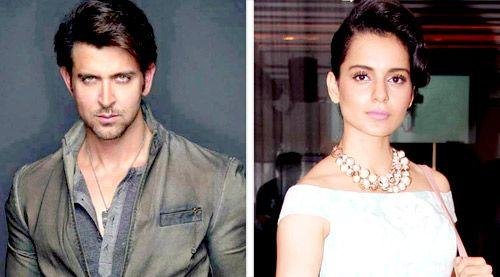 The legal tussle between two renowned Bollywood actors, Hrithik Roshan and Kangna Ranaut has now taken a new turn. Reportedly, Hrithik Roshan recently mentioned that the girl fan who has been sending random photographers and videos is Kangna Ranaut in an FIR that was filed last Friday (March 25). The actor however refrained from doing so earlier and had tried to protect the identity of the actress by claiming her to be a ‘girl fan’ in the complaint against the imposter that Hrithik Roshan filed with the cyber cell division way back in December 2014.

A few days after Hrithik Roshan and Kangna Ranaut allegedly slapped legal notices of defamation at each other, it was soon revealed that the Koi Mil Gaya actor had filed an FIR against an impostor using a fake id and interacting with his fans in 2014. While his FIR specifically highlighted the case of a girl fan, the actor has now reportedly revealed that it was indeed Kangna Ranaut who has been interacting with the so-called impostor.

Hrithik Roshan had filed a complaint way back in December 2014, about a fake id called [email protected] stating that an impostor has been using this to interact with the superstar’s fans. The actor’s complaint also included the incident of a certain girl fan who was sending her photographs and videos to the said e-mail id thinking she has been sending the same to superstar Hrithik Roshan. Now, we hear that Hrithik does not want to safeguard the name of the so-called girl fan and has decide to break his silence claiming that it is indeed Kangna Ranaut who has been mentioned in the complaint. The reason behind the same is said to be that Hrithik initially did not want to bother Kangna as the police will be summoning them for enquires but now, he reportedly has decided to come out in the open considering the hustle the case has caused in media.

Prior to this, when the reports of Hrithik Roshan approaching the cyber cell started surfacing, a couple of weeks ago, we hear that Kangna too had replied to the same and allegedly insisted that the person she was communicating with is indeed Hrithik Roshan.

As of now, the Cyber Crime Cell has reportedly summoned Kangna Ranaut and also her sister Rangoli, who is said to be a prime witness to this case. The duo has been given seven days to visit the division to record their statements for the same.