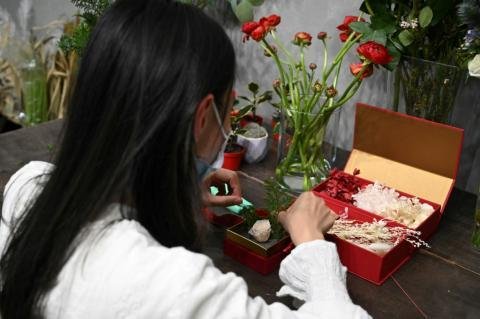 Samantha burst into tears when she opened the box from florist Elise Ip on Christmas Day. It was a surprise gift from her boyfriend, in custody for joining last year’s Hong Kong protests.

“She loves dogs but she loves me more,” he had written on a paper slip sent from a detention centre and relayed to Ip via a prisoner support group organised by former social welfare legislator Shiu Ka-chun.

After reading it, Ip found Samantha, who wished to use a pseudonym, a cactus in the shape of a puppy’s head.

“Receiving this is a great support to me,” Samantha told AFP.

“Those in custody don’t really have opportunities to send flowers or gifts to us.”

Samantha is one of more than 50 relatives and friends who have received gifts ordered behind bars and prepared by Ip, who initiated the free “Send Flowers With You” project in July.

“I hoped it would make people inside and outside the prisons feel closer to each other,” Ip told AFP.

“With every story told in each delivery, I also wish to remind the world that many have sacrificed their normal and happy life for the city.”

More than 10,000 people in Hong Kong have been arrested and thousands prosecuted for joining the massive, often violent pro-democracy protests that convulsed the Asian financial centre for seven months from June 2019.

The number of those remanded has been rising, and protecting prisoners’ rights has become increasingly difficult after pro-democratic legislators were forced out of the city’s legislature. Authorities have also tightened rules around official visits.

Shiu, who used to represent the social welfare sector in the legislature, formed a concern group, “Wall-Fare”, earlier this year.

The group provides services like pen pal matching, flower and snack delivery, and helps contact relatives of people in jail.