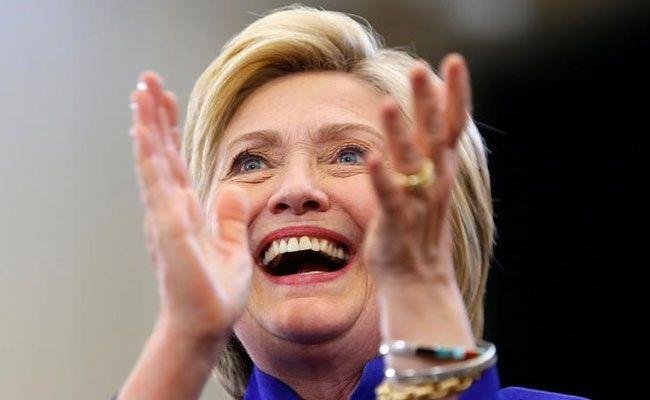 Former Secretary of State Hillary Clinton secured the Democratic Party’s 2016 nomination for the White House on Tuesday, becoming the first woman to head the ticket of a major party in US history.

In a symbolic show of party unity, Clinton’s former rival, US Senator Bernie Sanders of Vermont, told the chairwoman from the convention floor that Clinton should be selected as the party’s nominee at the dramatic climax of a state-by-state roll call at the Democratic convention in Philadelphia.

“I move that Hillary Clinton be selected as the nominee of the Democratic Party for president of the United States,” Sanders told thousands of delegates in the Wells Fargo Centre, which erupted in cheers.

After a tough battle with Sanders during the state nominating contests, Clinton is now the party’s standard-bearer against Republican nominee Donald Trump in the November 8 election.

Clinton, who promises to tackle income inequality and rein in Wall Street if she becomes president, is eager to portray Trump, a businessman and former reality TV show host, as too unstable to sit in the Oval Office.

But Trump, who has never held elective office, got a boost in opinion polls from his nomination at the Republican convention last week. He had a 2-point lead over Clinton in a Reuters/Ipsos opinion poll released on Tuesday, the first time he has been ahead since early May.

Sanders has endorsed Clinton, a former first lady and US senator, but some of his supporters protested in Philadelphia against the party leadership’s apparent backing of her during the bitter Democratic primary fight.

Sections of the convention hall were left conspicuously unpopulated on Tuesday night as delegates from strongly pro-Sanders delegations, including California, walked out after Sanders moved that Clinton be named the nominee.

Earlier on Tuesday, delegates from South Dakota had given Clinton 15 votes, formally ensuring that she had more than the 2,383 votes needed to win the nomination. She emerged with a total of 2,842 votes to Sanders’ 1,865.

In nominating Clinton, delegate after delegate made the point that the selection of a woman was a milestone in America’s 240-year-old history. US women got the right to vote in 1920 after ratification of the 19th Amendment to the Constitution.

“Yes, we do break barriers, I broke a barrier when I became the first Democratic woman elected to the Senate in her own right,” Mikulski said. “So it is with a full heart that I’m here today to nominate Hillary Clinton to be the first woman president,” Mikulski said.

Supporters of Clinton say her Washington credentials show she has the experience needed for the White House during troubled times as the United States tries to speed up its economic recovery and faces security challenges abroad.

Detractors view her as too cosy with the establishment and say she carries political baggage dating back to the start of her husband President Bill Clinton’s first White House term in the 1990s.

The star turn in Philadelphia on Tuesday will be the traditional warm spousal endorsement – with the twist that it will be a former president making the case for his wife.

In his prime-time address, Bill Clinton will be capping a day in which Democrats want to showcase Hillary Clinton’s achievements on issues such as women and families, healthcare and as a former secretary of state. Speakers will include women whose children died from gun violence, some at the hands of police.

Clinton, 68, will be watching from home in Chappaqua, New York, as her husband speaks, campaign officials said.