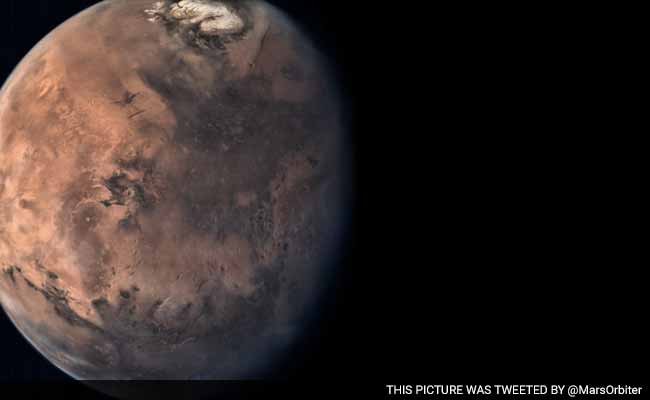 New Delhi:  India’s Mars Mission, Mangalyaan, sent a special message to Earth on New Year. It was accompanied by a special New Year gift for “earthlings”.

With the message was a lovely and rare photo of the full disc of Mars taken from 55,000 km, which shows the frigid north pole of the Red planet.

The New Year gift was much appreciated, drawing nearly 2,000 retweets and more than 1,200 likes.  Readers even joked about the Mars Orbiter is in a better place, considering the climate change on Earth.

Although it is has spent more than 15 months orbiting the Red Planet, this Rs. 450 crore mission could last at least another 10 New Years, says its maker, Indian Space Research Organisation.

Mars Orbiter’s last tweet was in July, when it sent what it called the “first snap after coming out of blackout”.

On India’s Independence Day, Mangalyaan sent some stunning photos of Ophir Chasma, part of the largest canyon in Solar System.