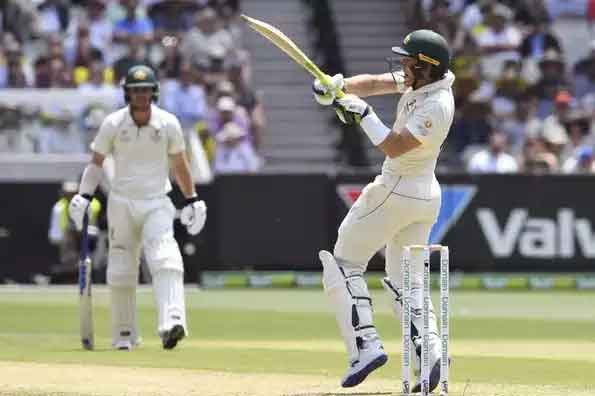 Tim Paine registered his highest Test score as captain while Travis Head was unbeaten on 98 as Australia dominated the post-lunch session on Day 2 of the Boxing Day Test at the MCG. Head and Paine, who got together in the second hour of the morning session when Steve Smith fell to a short ball from Neil Wagner, put on an unbeaten 147-run stand for the fifth wicket to help Australia to 431 for 5 at Tea, with 95 runs coming off 30 overs in the session.

Pulls, cuts and drives – there were plenty of those at the start of the second session as Paine and Head dealt in regular boundaries to power Australia forward, with the captain bringing up his first fifty-plus score in seven innings, with his seventh boundary of this innings. Be it driving through cover, playing the cut and pull shots or sweeping the spinner, Paine oozed confidence. Head, meanwhile, focused more on blunting the New Zealand bowlers but he also struck boundaries, with an upper cut off Wagner raising the first century stand of the innings.

Paine had outscored Head on boundary count before the left-hander caught up with his skipper and powered Australia past the 400 mark in the second hour after Lunch. Head slowed down after he entered the 90s as he ended the session two short of the century mark, having faced 35 deliveries to move from 90 to 98. Paine, whose highest score as captain before this game was 62 against South Africa in March 2018, was unbeaten on 77 at the break.

Earlier, only 27 runs came in the 14 overs bowled in the first hour on Day 2 as Smith and Head went about it in a watchful manner. Barring a couple of threes and the first four which came in the 12th over of the day, it was a patient partnership that kept the New Zealand bowlers at bay, with Trent Boult and Tim Southee not really troubling the batsmen much. But soon after the drinks break, life was injected into the session when Wagner bowled a well-directed short delivery to Smith, who fended at it awkwardly off the handle to gully where Henry Nicholls held on to a reverse one-handed catch jumping up.

While New Zealand sensed an avenue to get into Australia’s tail, the arrival of Paine also brought some positivity to Australia’s innings as the wicketkeeper-batsman didn’t shy from playing his shots, while Head too upped his scoring rate. Paine was peppered with short deliveries from Wagner but he handled them effectively while Head, at the other end, was solid with his approach as he crossed fifty, with the pair raising the fifth fifty-plus stand of the innings, before Lunch.