Harpita, Anirudh, Grace, Harrison, Marko and Mica are through to the final:The Great Australian Spelling Bee 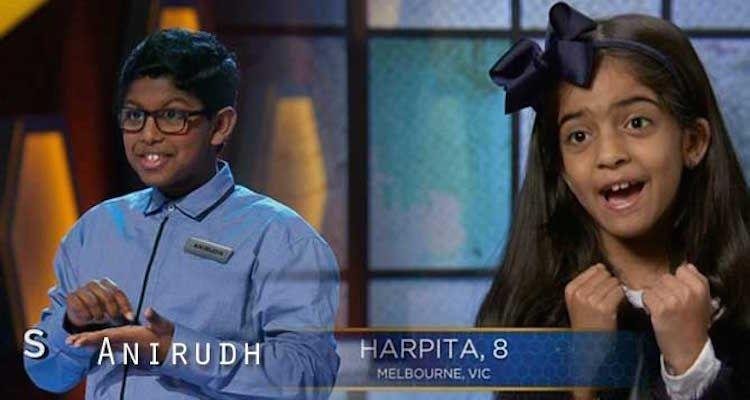 With only a grand final standing in the way of them becoming the spelling champion, the Great Australian Spelling Bee final eight were feeling the pressure on Monday night.

Eight super-spellers went head-to-head in a series of three challenges in the hopes of winning enough rounds to make it into the final six on Tuesday night’s grand final.

And with a long list of prizes up for grabs to those who made it through, tensions were certainly running high on Monday night’s ‘decider’ episode.
The episode commenced with hosts Grant Denyer and Chrissie Swan taking the stage and describing the forthcoming challenges, all of which are now single challenges rather than the less stressful format of team challenges.

The first challenge was Show And Tell, whereby the contestants are shown a letter and given a series of clues in order to determine what the word is and how to spell it.

The first two kids to guess and spell the word correctly would be given a spot in Tuesday night’s final.
Before the contestants knew what was happening, a legion of bee pinatas cascaded from the roof, accompanied by the sound of buzzing.

‘Whats that noise? where’s it coming from?’ quipped Grant before explaining that the flash cards were inside the pinata bees and that the only way to extract them was to hit them with a pinata stick.

Giggling with glee, the youngest contestant Harpita stepped forward and mustered all her strength to whack a dangling bee.
She returned to the podium, puffing with exhaustion with the letter N on her card.

Their first word for the night was a verb starting with NE that had 11 letters and was of latin origin.

‘The level of all the spellers is really high,’ said nine-year-old Anirudh, who has so far kept cool and collected during the show’s high pressure challenges.

Meanwhile, Marko remained confident, revealing to the camera that the Show And Tell portion is his ‘strong suit’.

After Anirudh failed to guess the word correctly (to his father’s dismay), crowd favourite Mica stepped in and correctly guessed and spelled the word ‘necessitate’.
Mica, 10, hails from Sydney, and attributes her spelling prowess to her teachers: ‘I think teachers are the heroes of education,’ she told the camera.

Amelia collected the next word, which started with an F and meant ‘happening by chance or good luck.’

Anirudh jumped in again, possibly in the attempt to redeem himself from last round, but again failed to identify the word.

History repeated itself as Anirudh proceeded to incorrectly identify the word, before Mica stepped in to successfully pick and spell what was revealed to be the word ‘fortunate’, sending her straight to the grand final.

‘I’ve never even heard that word before!’ Peyton gasped.
Mica, beaming, told the camera: ‘I never thought that I could do this. It’s one of the best moments of my life probably!’

Next to go through to Tuesday’s grand final was Marko, who managed to spell ‘aerodynamic’ and ‘schnauzer’ correctly, who remained calmly confident through the rounds.

Amelia, Anirudh, Grace and Peyton were soon to be knocked out, leaving Harrison and Harpita (the eldest versus the youngest) neck and neck.

Harrison emerged as the victor of the two, in a round that host Grant Harrison described as a ‘David and Golliath battle’.
It was time for round 2, Show and Spell, whereby words are spelled out letter by letter by each member of the group, one at a time.

This news did not come happily to Grace, who seemed to be crumbling under the pressure.

Sunshine coast based Amelia, however, put on a stoic face, citing her background in surf lifesaving training as the source of her bravery.
Proving the high calibre of the competition, 17 words were spelled by the group without a mistake being made during the second round.

‘That was an extraordinary marathon!’ said Grant as host Chrissie Swan cheered on.

Grace stumbled on the word ‘tenacious’ and was knocked out of the round, while Anirudh consoled her: ‘You’re a good speller- you can do it!’ he said
Peyton was also knocked out of that round after announcing that she was feeling nervous because the words were getting longer and harder.

Anirudh, however, made it to the grand final and went backstage to embrace his proud dad as he exclaimed ‘I did it!’.

In the third round, which was a traditional spelling bee, Grace and Harpita made it through to the grand final while Amelia and Peyton were sent packing.
The episode ended amicably, with the four girls who competed in the tense final round hugging, while Peyton and Amelia showed their maturity as they wished their fellow spellers well.

It’s a far cry from the behind-the-scenes tantrums that Grant Denyer hinted at on The Project.