Happy Rakhi: The Thread of Love 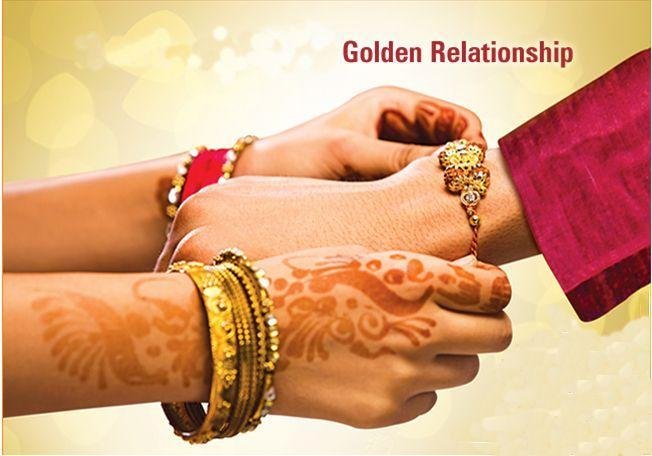 The chaste bond of love between a brother and a sister is one of the deepest and noblest of human emotions. ‘Raksha Bandhan’ or ‘Rakhi’ is a special occasion to celebrate this emotional bonding by tying a holy thread around the wrist. This thread, which pulsates with sisterly love and sublime sentiments, is rightly called the ‘Rakhi’. It means ‘a bond of protection’, and Raksha Bandhan signifies that the strong must protect the weak from all that’s evil.
The ritual is observed on the full moon day of the Hindu month of Shravan, on which sisters tie the sacred Rakhi string on their brothers’ right wrists, and pray for their long life. Rakhis are ideally made of silk with gold and silver threads, beautifully crafted embroidered sequins, and studded with semi precious stones.

This ritual not only strengthens the bond of love between brothers and sisters, but also transcends the confines of the family. When a Rakhi is tied on the wrists of close friends and neighbors, it underscores the need for a harmonious social life, where every individual co-exist peacefully as brothers and sisters. All members of the community commit to protect each other and the society in such congregational Rakhi Utsavs, popularized by the Nobel laureate Bengali poet Rabindranath Tagore.
The Friendly Knot

It won’t be wrong to say the fashionable friendship band in vogue today is an extension of the Rakhi custom. When a girl feels a friend of the opposite sex has developed a kind of love too strong for her to reciprocate, she sends the guy a Rakhi and turns the relationship into a sisterly one.
The Auspicious Full Moon

In Northern India, Rakhi Purnima is also called Kajri Purnima or Kajri Navami, when wheat or barley is sown, and goddess Bhagwati is worshipped. In Western states, the festival is called Nariyal Purnima or the Coconut Full Moon. In Southern India, Shravan Purnima is an important religious occasion, especially for the Brahmins. Raksha Bandhan is known by various names: Vish Tarak – the destroyer of venom, Punya Pradayak – the bestower of boons, and Pap Nashak – the destroyer of sins.
Rakhi in History

The strong bond represented by Rakhi has resulted in innumerable political ties among kingdoms and princely states. The pages of Indian history testify that the Rajput and Maratha queens have sent Rakhis even to Mughal kings who, despite their differences, have assuaged their Rakhi-sisters by offering help and protection at critical moments and honoured the fraternal bond. Even matrimonial alliances have been established between kingdoms through the exchange of Rakhis. History has it that the great Hindu King Porus refrained from striking Alexander, the Great because the latter’s wife had approached this mighty adversary and tied a Rakhi on his hand, prior to the battle, urging him not to hurt her husband.
Rakhi Myths & Legends

According to one mythological allusion, Rakhi was intended to be the worship of the sea-god Varuna. Hence, offerings of coconut to Varuna, ceremonial bathing and fairs at waterfronts accompany this festival.
There are also myths that describe the ritual as observed by Indrani and Yamuna for their respective brothers Indra and Yama.

Once, Lord Indra stood almost vanquished in a long-drawn battle against the demons. Full of remorse, he sought the advice of Guru Brihaspati, who suggested for his sortie the auspicious day of Shravan Purnima (fullmoon day of the month of Shravan). On that day, Indra’s wife and Brihaspati tied a sacred thread on the wrist of Indra, who then attacked the demon with renewed force and routed him.

Thus the Raksha Bhandhan symbolizes all aspects of protection of the good from evil forces. Even in the great epic Mahabharata, we find Krishna advising Yudhishtthir to tie the puissant Rakhi to guard himself against impending evils.

In the ancient Puranik scriptures, it is said that King Bali’s stronghold had been the Raakhi. Hence while tying the rakhi this couplet is usually recited:

“I am tying a Rakhi on you, like the one on mighty demon king Bali. Be firm, O Rakhi, do not falter.”

Rituals like Rakhi, there is no doubt, help ease out various societal strains, induce fellow-feeling, open up channels of expression, give us an opportunity to rework on our role as human beings and, most importantly, bring joy in our mundane lives.
“May all be happy
May all be free from ills
May all behold only the good
May none be in distress.”

This has always been the idea of an ideal Hindu society.