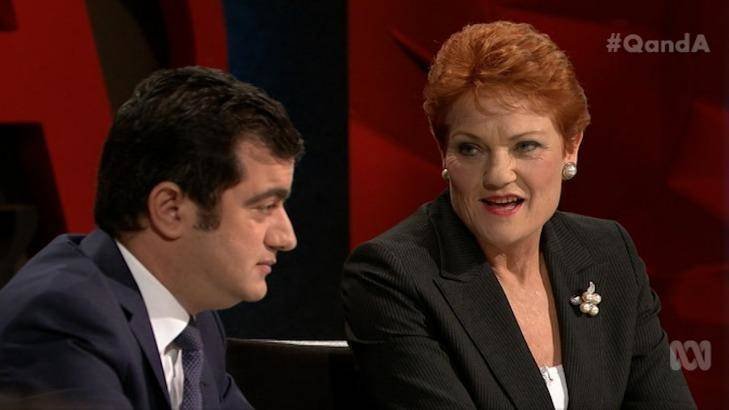 A social media storm has erupted after Queensland Senator-elect Pauline Hanson spoke out about Islam on ABC TV’s Q&A program.

The One Nation leader attempted to justify her quest for a royal commission into Islam while appearing on the panel show on Monday night, sparking outrage online.

She told the live audience that she didn’t believe Islam is compatible with the Australian culture and way of life, adding that people felt they couldn’t walk the streets as they feared being attacked by Islamist terrorists.

Her comments were attacked on social media as hateful, ignorant and divisive.

Others expressed concern about how Ms Hanson’s election success had sparked attacks against Muslims.

“Since @PaulineHansonOz has risen with #Election2016 – a Muslim man is called ‘Muslim pig’ on the streets of Cronulla everyday #shame #qanda,” Pippa Bailey tweeted.

More than 14,000 people tweeted 71,000 times using the #QandA hashtag during Monday’s night’s program, according to the ABC.

Twitter lit up during an exchange between Ms Hanson and Labor Senator Sam Dastyari, who migrated to Australia with his family in 1988 from Iran.

Mr Dastyari asked if Ms Hanson would have allowed him into the country as a five-year-old because he was born Muslim.

“Are you a Muslim?” Ms Hanson asked.

“I’m surprised, I didn’t know that about you.”

“It is a matter of real concern that a member of our Senate is so foolish,” prominent Australian barrister Julian Burnside tweeted.

“Pauline Hanson cut a grotesque profile on #QandA. Astounding that this bigot commands a following in Australia, but that’s democracy I guess,” John Myburgh wrote.

While the social media response was stacked against Ms Hanson, she did draw support from some.

One tweeter who went by the name of Grandee Zip described Ms Hanson as a strong Australian woman who was “defending our rights” and “shining light on unfolding catastrophe”.