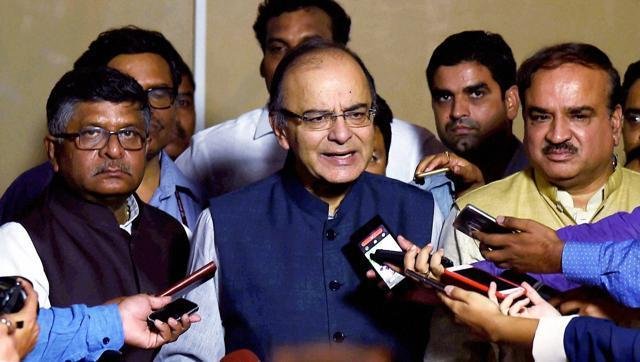 India’s plan for a unified market under the goods and services tax (GST) moved closer to the finish line on Wednesday as the Rajya Sabha passed the 122nd Constitutional Amendment Bill, even as a few disputes remained unsettled.

At the end of a seven-hour debate, there was no clear picture on the tax rates. The Congress batted for a cap on the GST, but finance minister Arun Jaitley maintained that the government will try to keep the rate “moderate”.

Prime Minister Narendra Modi took to Twitter to thank the leaders of all parties on the “truly historic occasion of the passage of the GST Bill in the Rajya Sabha”.

“We continue to work with all parties and states to introduce a system that benefits all Indians and promotes a vibrant and unified national market. This reform will promote [Make in India], help exports and thus boost employment while providing enhanced revenue,” he said in a series of tweets.

The landmark legislation – first introduced by former finance minister P Chidambaram in his 2006-07 budget speech — will give further impetus to ease of doing business in the world’s fastest growing major economy.

“The GST regime will be a modern, better system that will help taxpayers, seamless transfer of goods and services across (the) country and check evasion. Some economists believe it will also give boost growth rate,” Jaitley said.

“Even if the Constitution has provisions about a money bill, the government can always choose to bring a bill as a simple financial bill,” Chidambaram added.

The Congress fears that the government will bypass the Rajya Sabha, where the ruling NDA is in a minority, by introducing the sub-ordinate legislations as money bills. In such bills, the Rajya Sabha can only discuss but can’t vote.

Even as the Centre acknowledged the contribution of the Congress in the groundwork on the GST bill, it didn’t accede to its demand that the next three bills will not be made money bills.

“We will go by the Constitution and precedence,” Jaitley said.

Despite the differences, there was camaraderie from both sides of the aisle in the Upper House, an unusual sight in recent months dominated by ugly spats and repeated disruptions in Parliament.

“GST also stands for good sense triumphs,” Chidambaram said, summing up the mood of the occasion.

Hammering out a consensus

For the past two years, NDA managers had been negotiating with political parties, especially the Congress, to clear the bill pending before parliament since 2011. Modi had even held his first meeting with Congress chief Sonia Gandhi to hammer out a consensus.

The government on Tuesday circulated nine amendments to address their concerns. These included a more robust grievance redressal mechanism, scrapping of 1% additional tax, and mandatory compensation to states for revenue loss under the new tax regime.

After the bill’s passage, Jaitley said, “Today is indeed a historic day, the most important thing is that the GST bill was cleared unanimously.

“The government’s approach was to build a larger consensus and we succeeded in it. It will convert India into one unified market. The Centre and the state government(s) will have to work together to make this a great success.”

The bill will now be taken back to the Lok Sabha for its approval on the changes, he added.

The government hopes to have the bill cleared before the end of the monsoon session on August 12, and launch it at the start of the next fiscal year — April 1, 2017. But it looks ambitious; the earliest the GST will kick in will be in July, say experts.

The Bill, with nine amendments, secured support from all parties except the AIADMK. J Jayalalithaa’s party walked out before the voting after announcing that the bill is unconstitutional as it harms the federal structure.

The Trinamool Congress also wants small businesses with turnover up to Rs 1.5 crore in a year to remain within the states’ control, while larger businesses can come under dual control of states and the Centre. No agreement has been reached on this aspect yet.