Georgetown, A Jesuit University, Is The First US College With A Hindu Priest As A Chaplain 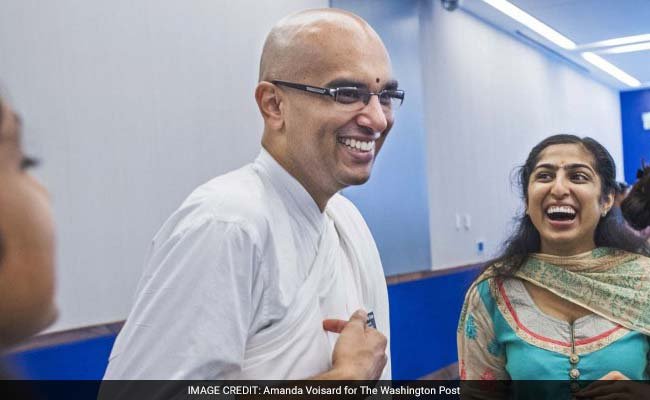 When Brahmachari Vrajvihari Sharan led his first worship service in his new job as a Hindu chaplain Sunday, he knew his audience.

As the service began, he asked worshipers to clear their minds. “Close all the tabs that are open, just as you would do to a Firefox window,” he said.

The comparison — of a spiritual mindset to an Internet browser — worked at once. More than 40 college students, many of whom had been up until 3 a.m. the Saturday night before this 9 a.m. service, chuckled appreciatively and fell into a reverent silence.

This is Sharan’s new job: bringing Hindu tradition to Georgetown University, in a youth-savvy voice. He is the first Hindu priest to serve in the role of chaplain at any university in the United States.
Other universities have employed Hindu monks, who have less training than priests, or have enlisted lay people to work as chaplains for Hindu students, Georgetown officials said.

That this Jesuit institution, founded as a Catholic college and still proudly dedicated to its religious purpose, would be at the forefront of educating youths about a different religion should not be counterintuitive, Georgetown officials said. “Part of our mission and our ethos is our desire to form the whole person,” said the Rev. Greg Schenden, a Catholic chaplain at the university. Georgetown wants its students to experience spiritual growth during their time in college – all students, not just Catholic ones.

To that end, a rabbi and an imam are on staff as chaplains. With 300 Hindu students across undergraduate and graduate schools, the college felt the call for a Hindu chaplain to foster those youths’ religious growth as well. “It wasn’t just to say, ‘Oh, we got one here,’ ” Schenden said. “It was, ‘Oh, we need one here.’ ”

Sharan, 31, began to fill that need Sunday, when he led puja, the weekly worship service that students have been leading on their own for years. In traditional white garb, he chanted Sanskrit mantras while playing the harmonium, pausing frequently for student-friendly explanations of the rituals.

Neharika Khandavalli, a senior, has attended puja at Georgetown for three years, and she proclaimed the service that Sharan led the very best one. “It couldn’t have gone better,” she said afterward. “All of us students, we’re religious and Hindu, but we wouldn’t have been able to do what Brahmachari-ji did.”

She said that she and her fellow members of the Hindu Student Association’s board have struggled before with how to put together a service that meets students’ varied expectations, in a religion where everything from which prayers you say to which gods you worship can vary drastically in different regions of India and different religious sects.

Priyanka Dinakar, a sophomore, said she didn’t want her religious education to stop after years of childhood Sunday school. She wants to learn longer prayers in Sanskrit now that she’s older. “It’s such a vast religion. There’s still so much to learn,” she said. She’s excited to have a teacher on campus who can educate her and her peers now. “It means a lot. It means the university cares enough to bring a Hindu chaplain for us.”

Having trained as a priest at ashrams in India, then completed his Ph.D in Sanskrit at the University of Edinburgh and taught at universities in Wales and London, Sharan is well equipped to enrich Georgetown students’ Hindu education. During Sunday’s service, he interjected informative tidbits between prayers throughout the hour.

He explained several mantras and the personages of a few Hindu gods. He discussed the debate between Hindus on whether the religion has hundreds or even millions of gods, or one Supreme Being who appears in many forms.

“Our Catholic friends will ask, ‘Why do you have so many gods? Why do they have so many arms?’ ” he said. “Why, why, why? It feels like you have to be an ambassador for your entire religion. We want to make sure you have some knowledge.”

Outside the service, Sharan said he was eager to uproot his life for this job, moving from his native Britain all the way to a freshman dorm at Georgetown, where he now serves as a chaplain-in-residence among about a hundred 18-year-olds.

A Hindu priest at Georgetown, Sharan said, is “very, very surprising. It’s a testament to their commitment and not simply lip service.” Yet he said his new job fits the school’s philosophy: “They would like students to leave Georgetown with a deeper understanding of their spiritual self and their place in an interreligious society.”

On Sunday morning, dozens of students, many of them new freshmen in their first week on campus, did leave puja with a deeper understanding of Hinduism. And with something that some students said was just as much of a draw, on a campus full of ever-hungry college students: a tasty samosa.