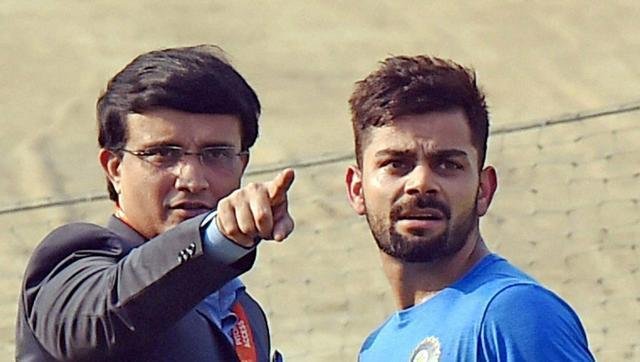 Former captain Sourav Ganguly said he would be surprised if current limited-overs skipper Mahendra Singh Dhoni leads the Indian team in the 2019 World Cup, backing Virat Kohli to be given the leadership role soon.

Ganguly said the national selectors should take a call on this issue so that the country can plan for the future.

“(MS) Dhoni has been captain for nine years, which is a long period. He has been fantastic in the way he has gone about his job as captain, but does he have the ability in next four years to see India into the World Cup in 2019. Does he have it in him to go for another four years? He has already given up Test cricket and now plays only ODIs and T20s,” Ganguly said.

“So the selectors need to find an answer to whether they see Dhoni leading India in 2019. If the answer is no, then find a new captain. If the answer is yes, which I will find very very surprising, Dhoni continues,” he was quoted as saying by ‘India Today’.

“Every cricket team in the world plans their future. But my question to the selectors is three-fours years down the line, do they see MS Dhoni as captain of India?” Ganguly asked.

“I am not saying he needs to quit cricket, I feel he should continue to play in the shorter formats of the game. India still need him in the limited-overs cricket,” said the former captain.

Ganguly also lauded Kohli for his achievements as Test captain and for his on-field exploits in every format of the game.

“Virat Kohli is getting better every time. He is probably the best in the world in terms of consistency. His mental energy, tenacity is unreal. His attitude on the field is superb. His record as Test captain has been good,” he said.

“Decision on appointing Kohli as captain should go in terms of where MS goes from here? There’s no disregard to him (Dhoni), he’s been one of the greatest captains of the country,” Ganguly said.

Kohli has been averaging 52.70 as Test captain and has slammed four centuries in his 10-match stint so far. In ODIs, Kohli has led India in 17 matches and his batting average has been 70.83, including four hundreds. Overall, he averages 51.51 in the 50-over format.